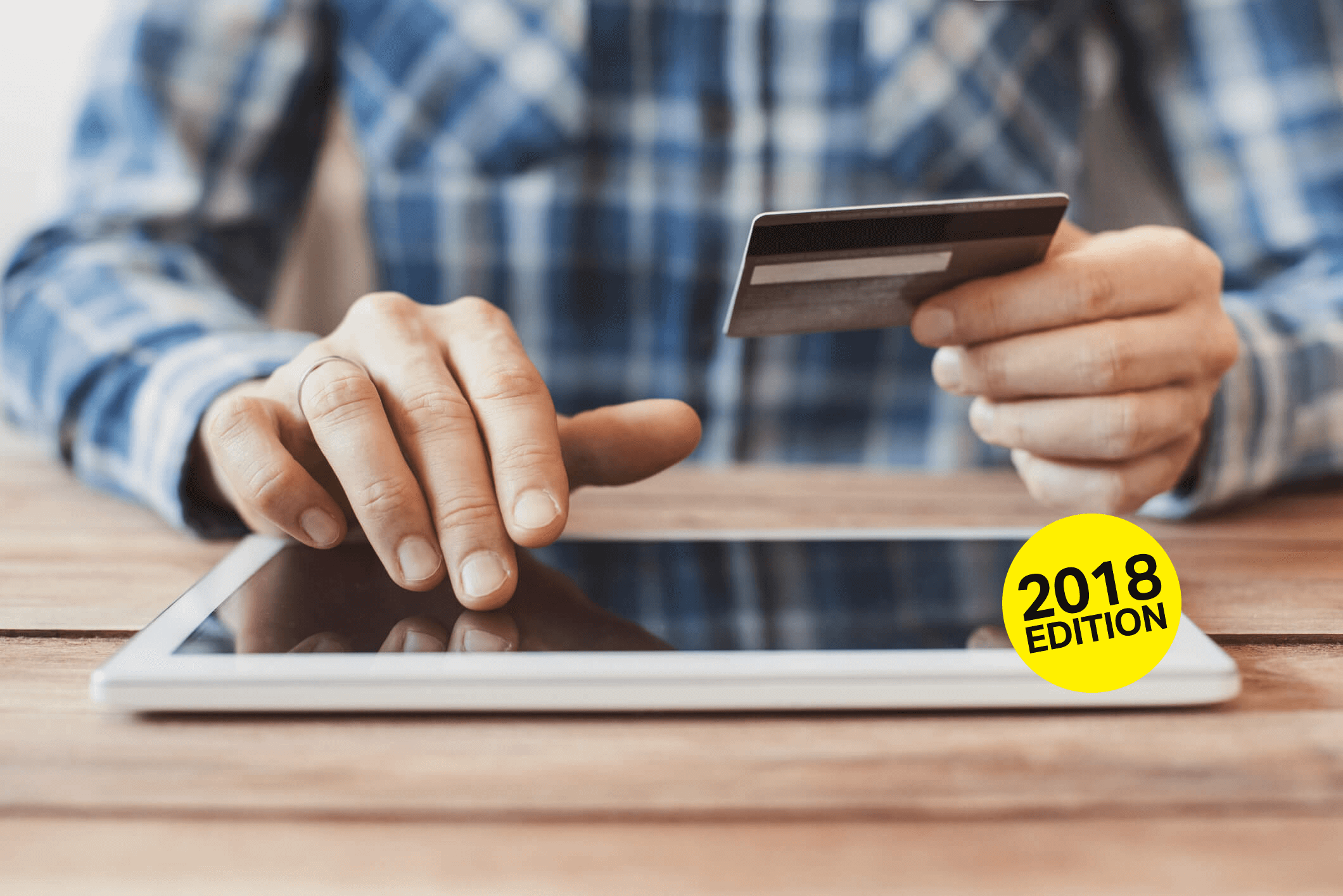 In 2016, we tested the web performance of the world’s top 50 e-commerce sites. The e-commerce and online retail industry generated over $2.2 trillion in revenue in 2017 alone, so it is with little surprise that e-commerce websites are growing and changing constantly.

With the demand for websites to deliver faster and smoother visitor experiences, are today’s big players in e-commerce keeping up in terms of site performance?

We tested each page for how long it took to load, size, requests performed per load, and its overall performance grade according to YSlow’s ruleset.

You can always jump ahead to see how the world’s top 100 e-commerce sites performed in terms of:

We compiled a list of the top 100 e-commerce sites based on the number of visitors each site attracts, according to Alexa®.

We then tested each page from our nearest test location to provide the optimal load time for each site. Our Page Speed Monitoring tool tested each website every 30 minutes for a week between January 15 and February 1, 2018. As such, all results displayed are the median of all the tests we conducted.

The fastest site loads in under half a second

That’s right, bhphotovideo.com topped the scoreboard with an average 0.468 second load time. In fact, all but two of the top 10 fastest e-commerce sites loaded in under one second.

If we measure our top 100 sites against the widely-accepted 2-second load time benchmark, 39% of them loaded in this time, while 99% of the sites we measured loaded in 5 seconds or less. Compared with the study we did in 2016, we start to notice improvements in load time: previously, 6% of the top 50 sites we tested took 5 or more seconds to load.

Following bhphotovideo.com, in second and third places were walgreens.com and dsw.com, loading in 0.522 and 0.744 seconds respectively. Interestingly, bhphotovideo.com was the fastest loading page in our previous study—they’ve got their performance game down. 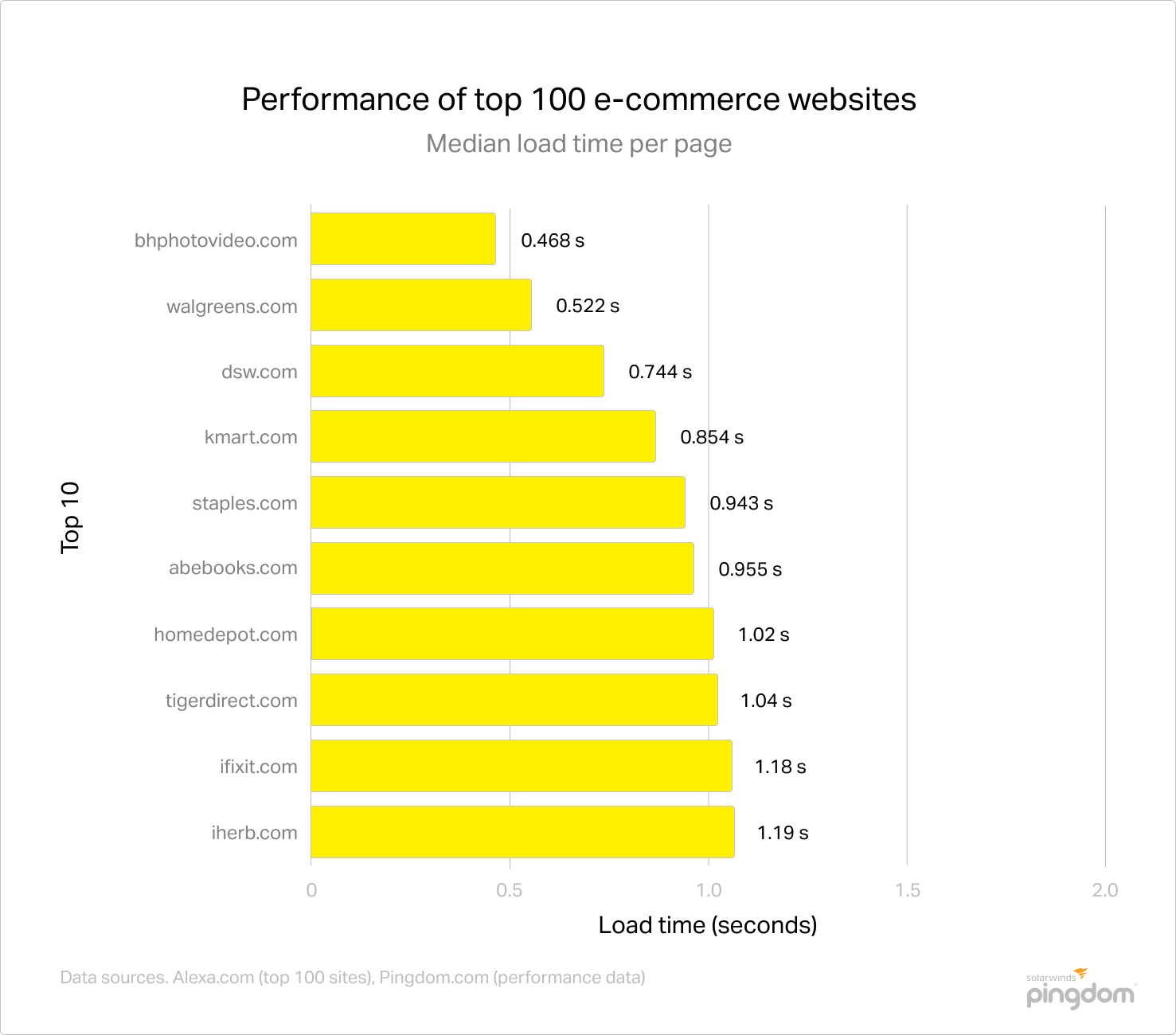 On the other half of the scales, the slowest performers still had relatively good load times, with all but one loading in under 6 seconds. Even among the 10 slowest sites, three of them (crateandbarrel.com, anthropologie.com, and cafepress.com) still managed to load in under 5 seconds. Yoox.com, the slowest site we tested, loaded a substantial 7 seconds slower than the average load time for all the pages we tested. 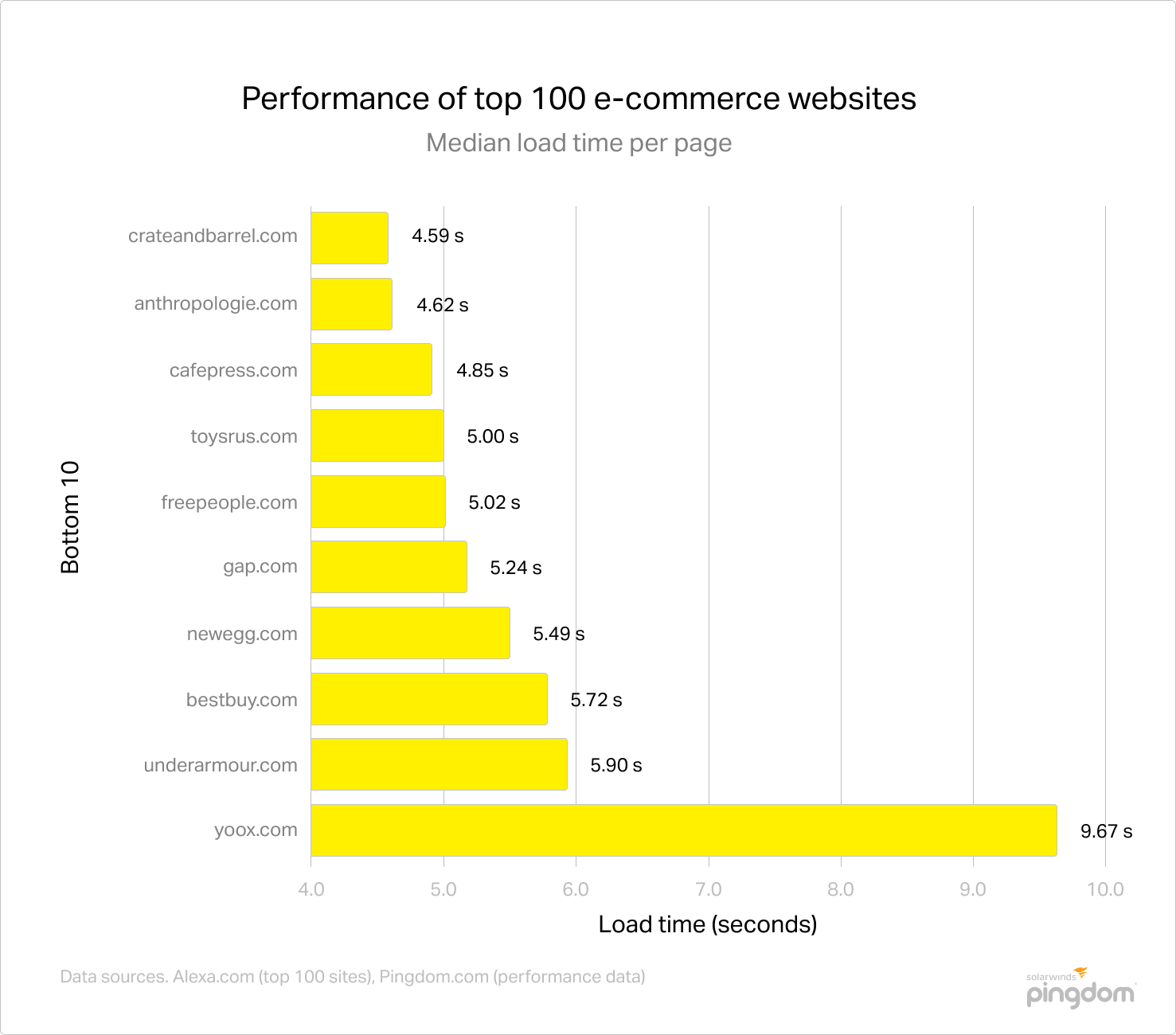 We used the data we gathered from a sample segment of e-commerce websites that use our Visitor Insights end-user monitoring to conduct a study showing the correlation between page load time and bounce rate. 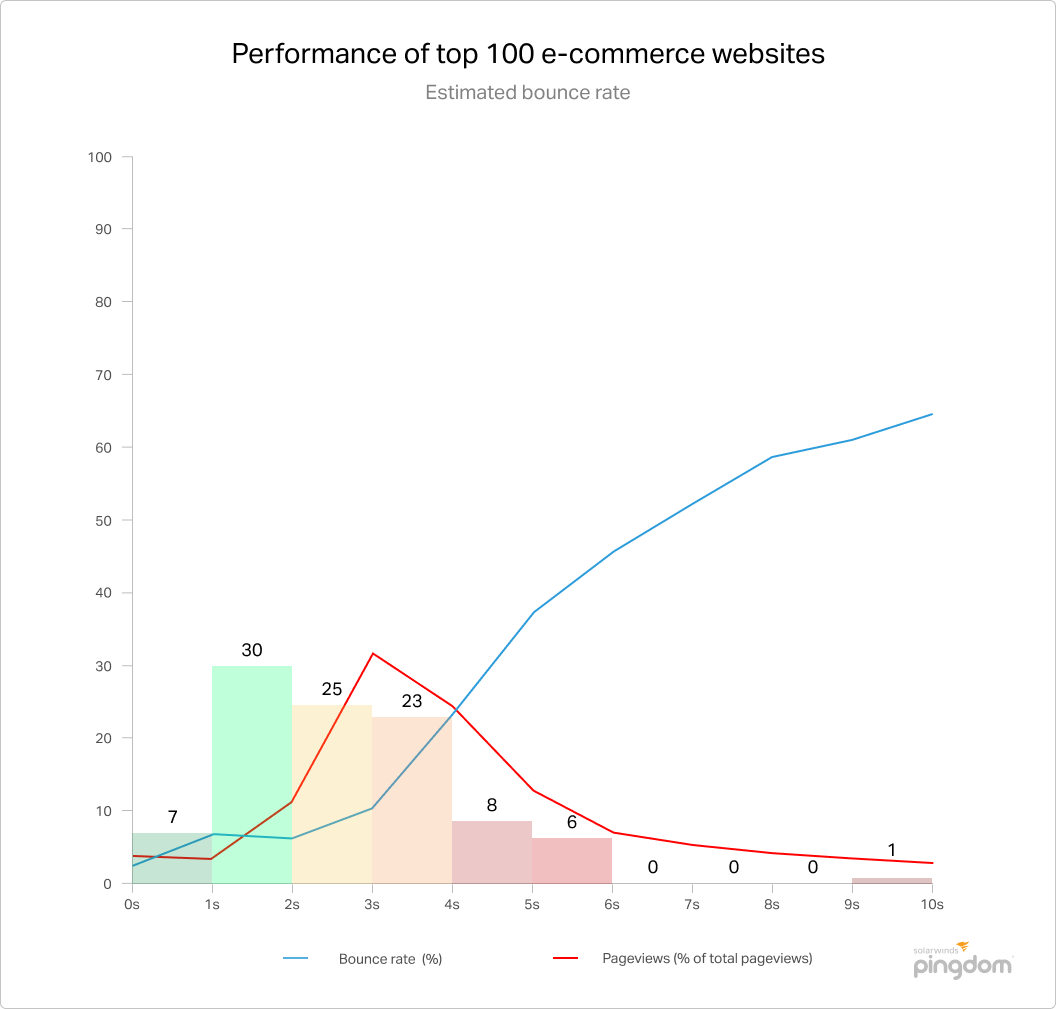 If we apply these bounce rates to the world’s top 100 e-commerce sites, we can guess that if the average page loads in 2.67 seconds, the average bounce rate hovers at 8%. In reality, this figure is much higher based on the fact that many visitors tend to browse multiple times before purchasing, and moreover, visit multiple sites to compare prices. Regardless, this data highlights the direct correlation between a page’s load time and how many of its visitors are likely to bounce.

In addition to seeing how quickly each page loaded, our Page Speed monitoring also showed us how large the homepages were for each of the top 100 e-commerce sites. Much like in 2016, we saw that there is still a large range of page size, from a tiny 0.719MB (abebooks.com) to a hefty 14.21MB (mango.com). 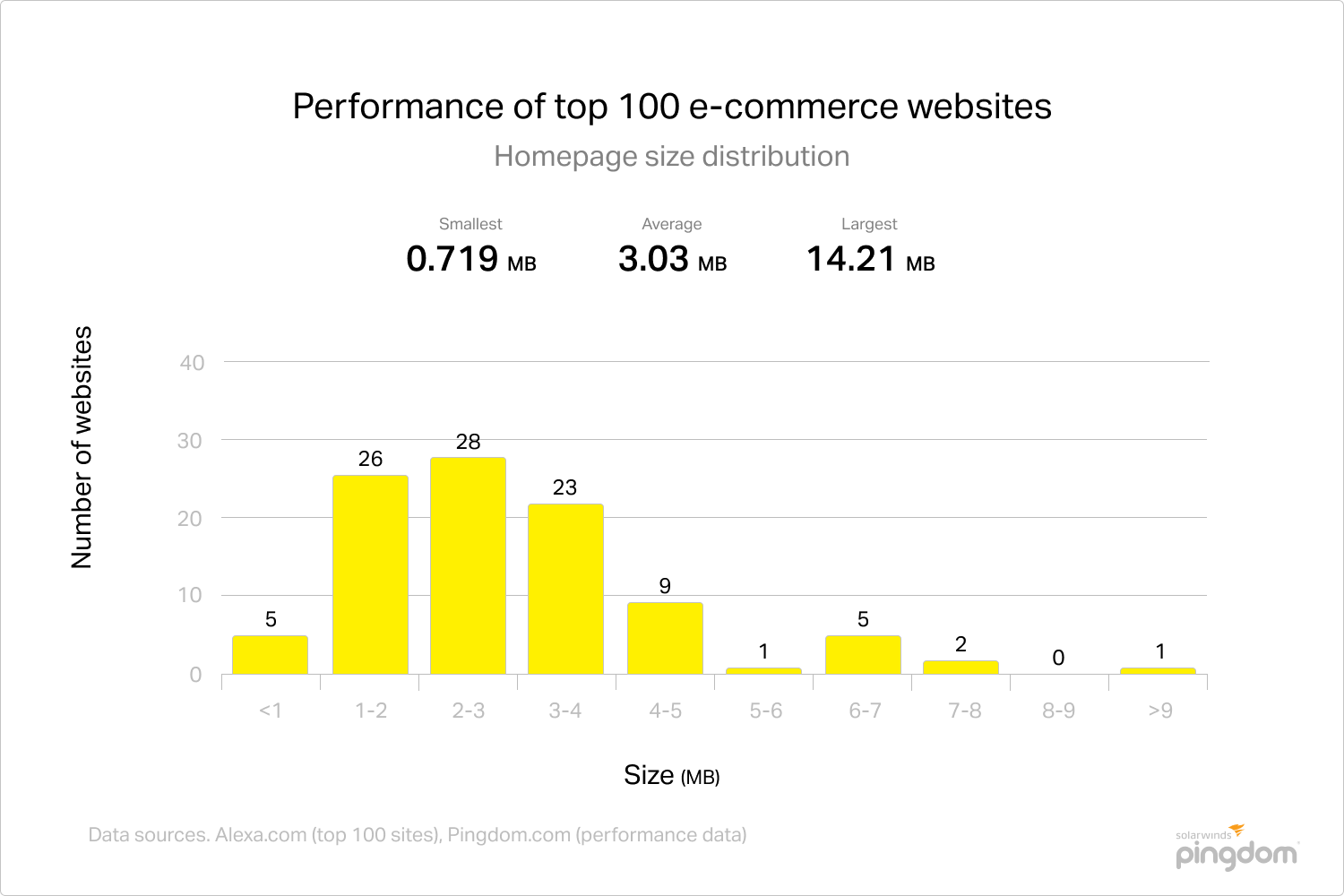 As the results show, the vast majority of the sites we tested—82%—were under 4MB in size. It’s also interesting to see that the average page size in 2018 has grown by over half a megabyte since 2016.

According to HTTP Archive, the average page size as of January 2018 is 3.54MB. This means that the average of our top 100 sites sits comfortably below the average size, and goes to show the importance of keeping page size compact.

However, page size is not necessarily indicative of performance. The largest site we tested (mango.com) had on average a faster load time (3.79 seconds) than crateandbarrel.com, which was almost half the size (7.84MB) but took an average of 4.59 seconds to load.

The 10 smallest sites we tested really were lightweight in terms of size. Following closely behind abebooks.com were carid.com and 6pm.com, at 0.896MB and 0.919MB respectively. In fact, all of the five smallest sites weighed in at under a megabyte each. 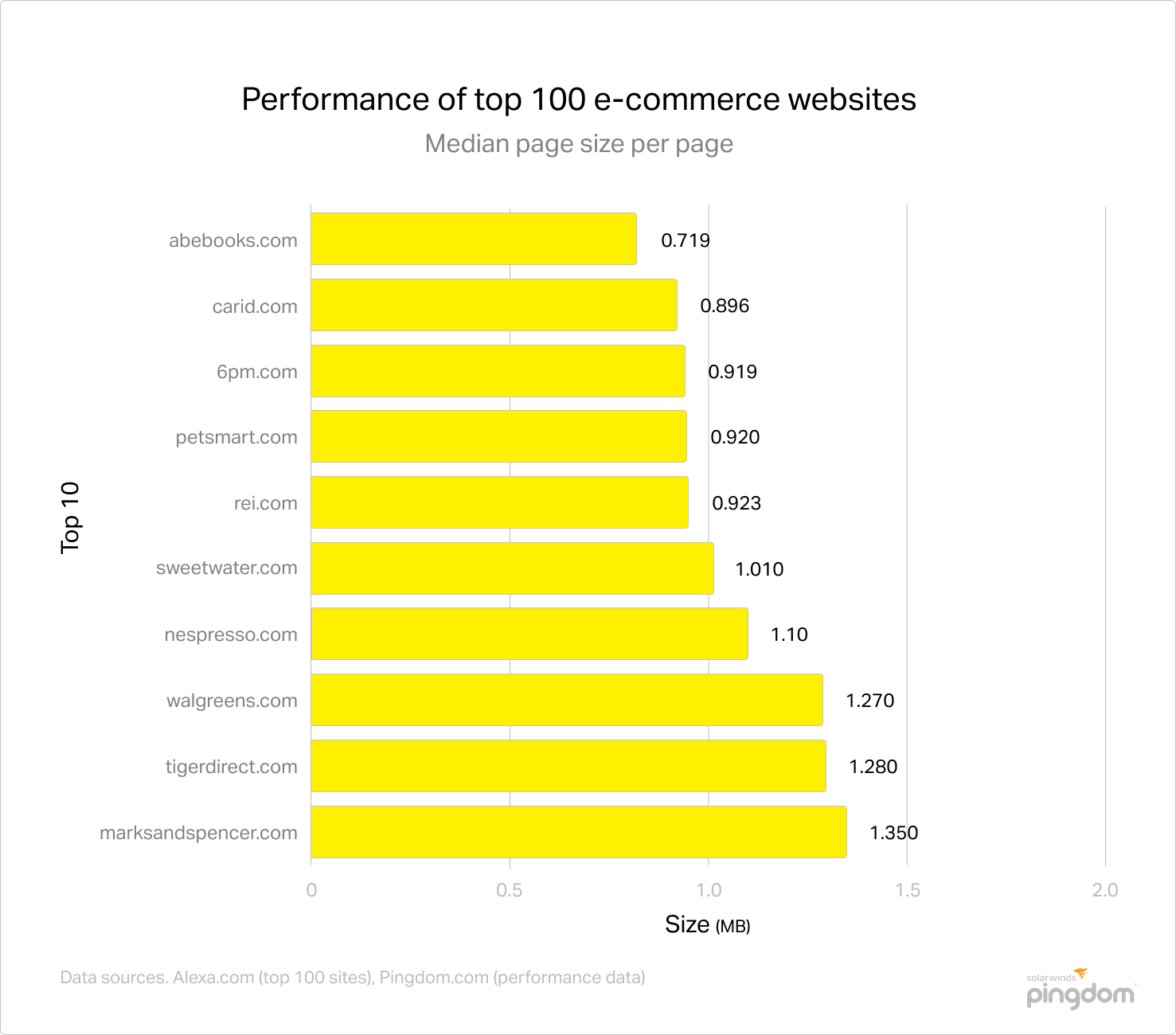 All 10 of the sites with smallest pages sizes were under 2MB in size, and well under the 3.03MB average of all 100 sites tested.

Conversely, the largest 10 sites we tested all placed well above the average, with all but one coming in at over 5MB in size. The largest size was mango.com (14.21MB) with crateandbarrel.com (7.84MB) and nike.com (7.19MB) as the second and third-largest respectively. 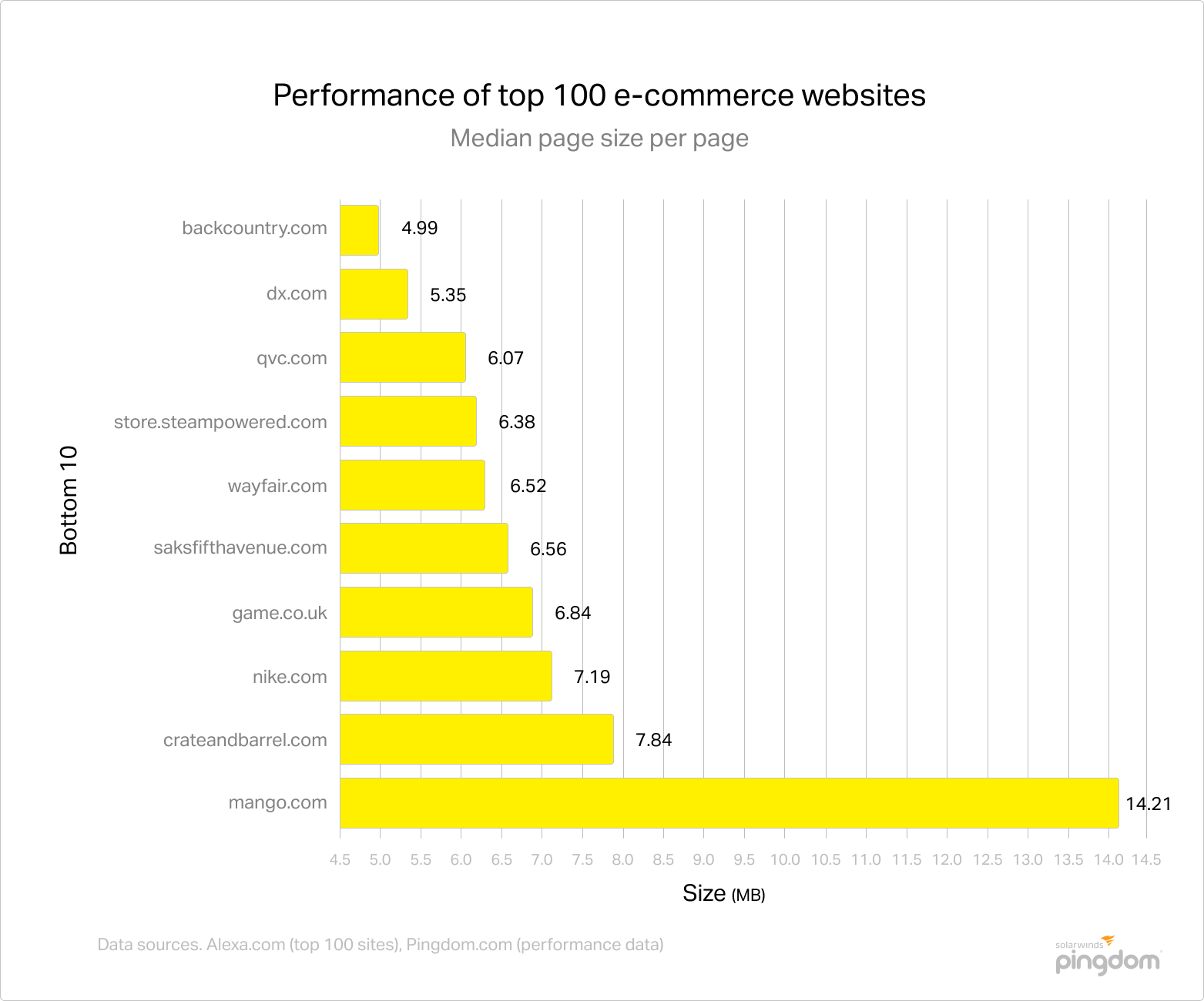 To put the huge range of page sizes into perspective, the largest site we tested is 19 times larger than the smallest.

All websites make requests to load content from a web server, and requests are made for everything and anything, like JavaScript®, CSS files, images, videos, etc.

Of course, as loading a webpage’s content is reliant on requests, and each request takes time to perform, it is ideal to keep the number of requests your site makes low.

The average number of requests performed per load by the top 100 e-commerce sites was 192, with 60% of the sites performing less than 200 requests. 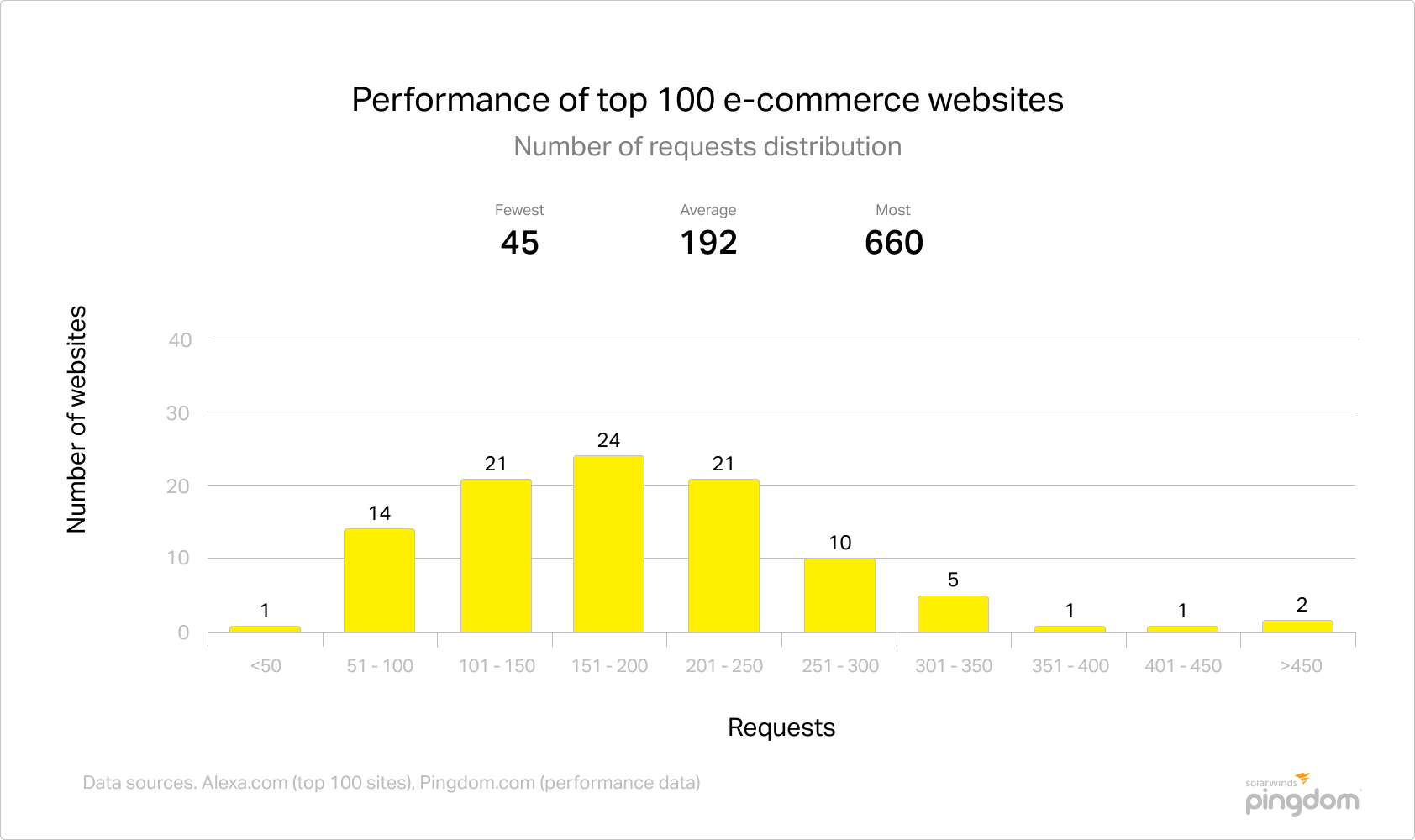 Interestingly, the average number of requests performed has increased by 23 since we performed this test in 2016, but with sites becoming heavier in rich content, this isn’t so surprising.

The fewest number of requests

All 10 of the sites with the fewest number of requests made per page load performed less than 100 requests. petsmart.com topped the scoreboard with a mere 45 requests per load, which was less than half of shop.lego.com, coming in the tenth position with 91 requests. 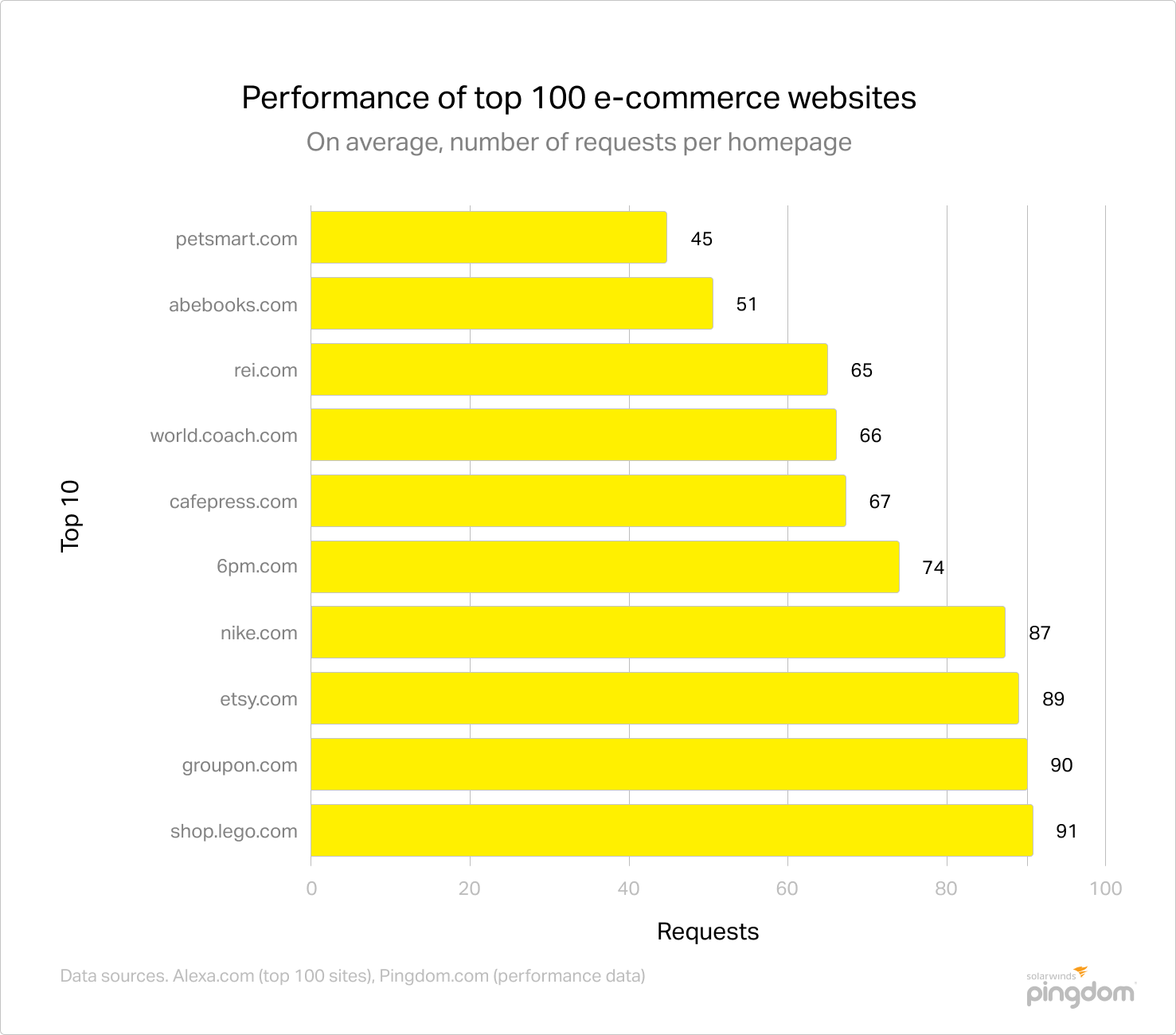 As we’ve mentioned before, although a fewer number of requests made per page load can indicate a faster loading page, as it has to make fewer requests to load all of the necessary content, it isn’t guaranteed.

Even though petsmart.com topped the chart in terms of fewest requests performed per load, it didn’t make it into either of the top 10 for fastest loading page or smallest size.

The highest number of requests 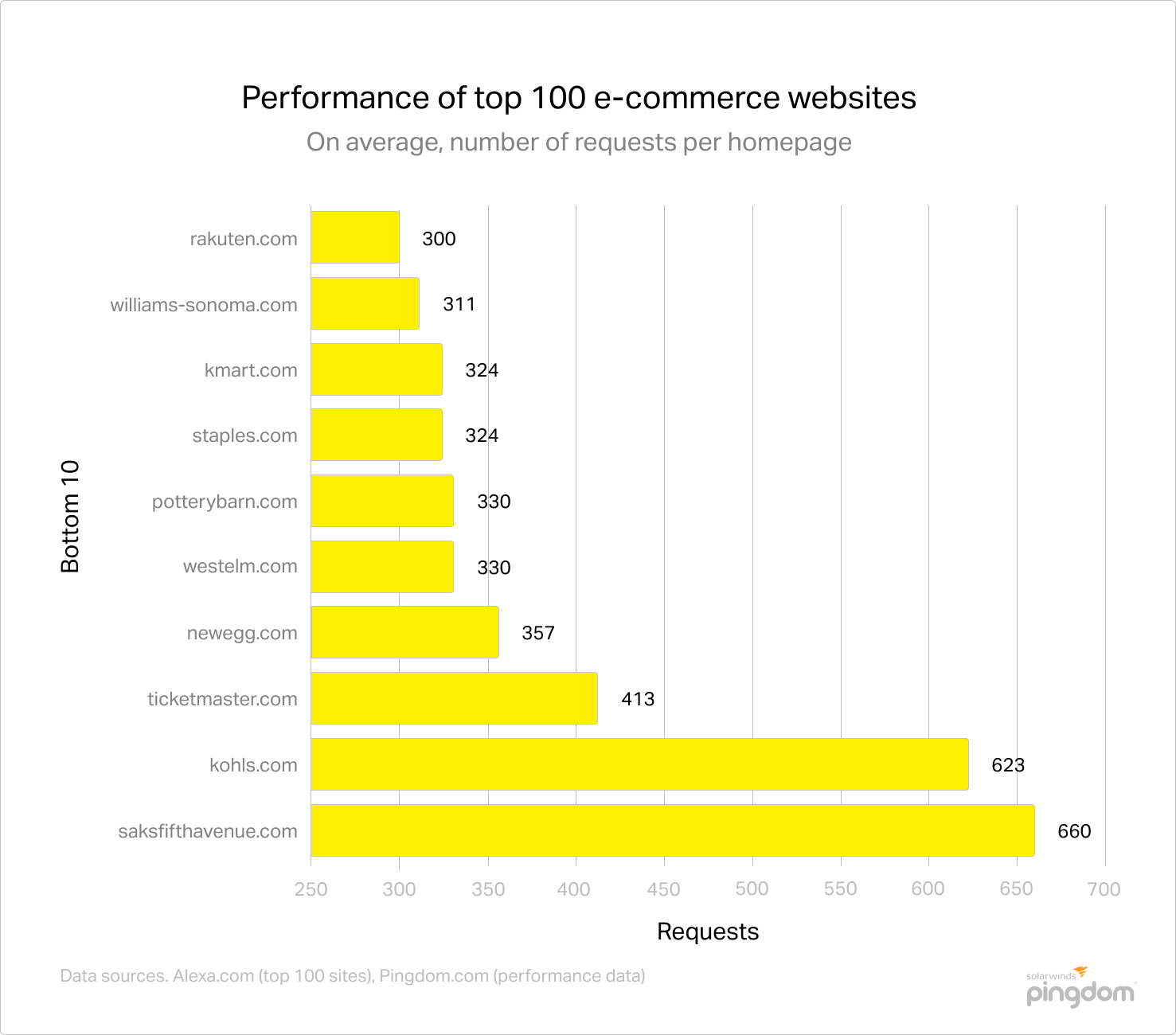 Aside from the largest two, the number of requests drops significantly, with ticketmaster.com performing 413 on average and rakuten.com making only 300.

The performance grade tells us how a website conforms to web performance best practices from YSlow. Compared to the test we ran in 2016, we can see that not much has changed: more than 50% of the sites we tested received a D grade or lower. 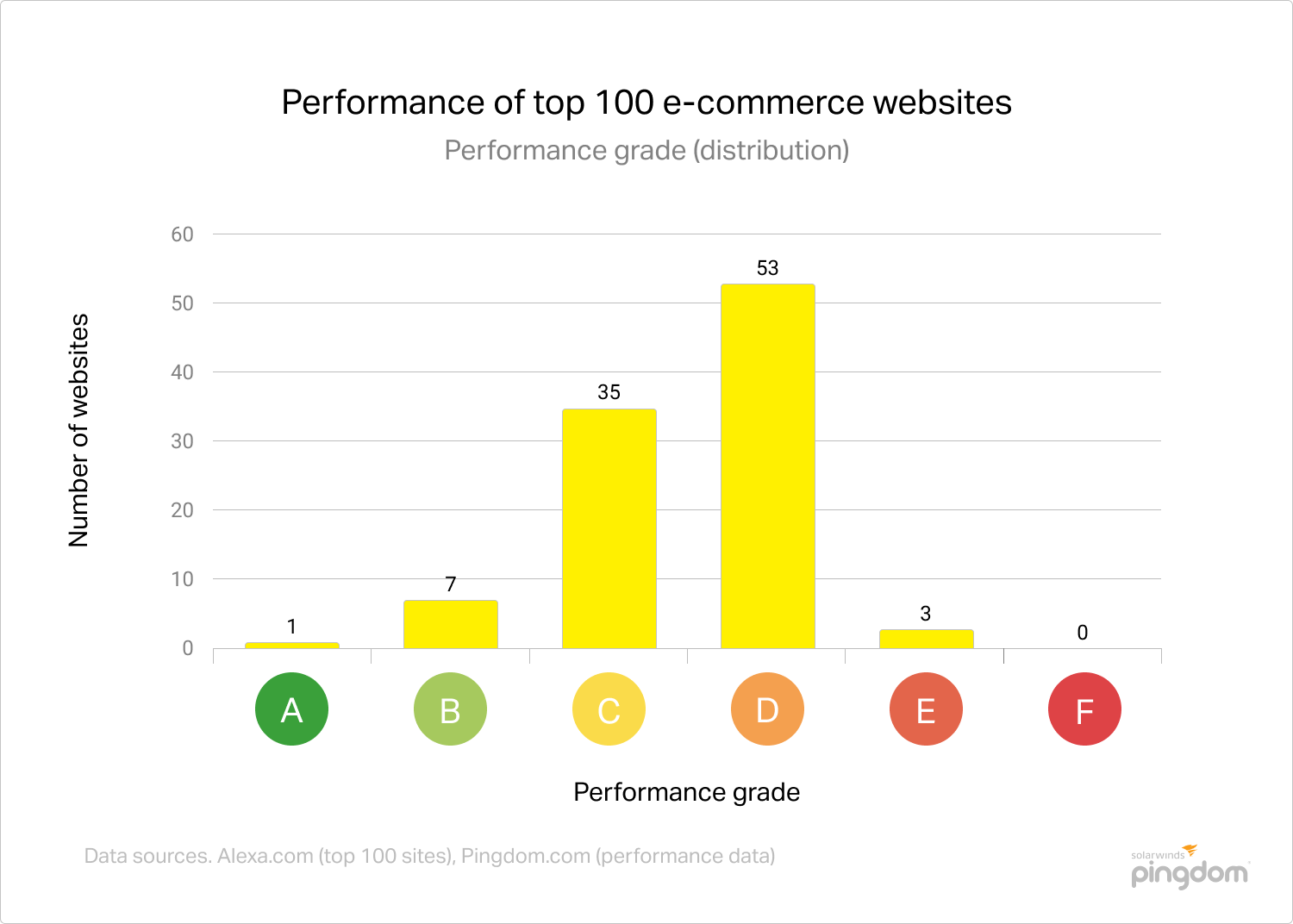 Additionally, only one of the world’s top 100 e-commerce sites scored an A grade: bhphotovideo.com, the same site as in our 2016 study.

The web performance of the world’s top 100 e-commerce sites is, like in 2016, a mixed bag. Although the fastest page today is 0.133 seconds faster than the fastest e-commerce page in 2016, the average page load time has actually increased by 0.16 seconds.

With richer content taking a more prominent role when it comes to customer interaction and experience, it comes as no surprise that the average page size has increased by almost 0.5MB. Similarly, the more content a page has, the more requests it will likely have to make to load it all, which we see in the average number of requests performed having grown by 23 since 2016.

Even with all of this, the state of web performance when it comes to e-commerce sites is far from bad. As we’ve discussed previously, webpage performance is important. However, it isn’t everything: companies are shifting focus to delivering better site experiences to their visitors. Happier customers, after all, are returning customers.

Even so, we’d argue that the best foundation for delivering the best possible experience your e-commerce site can offer is by making sure your site is properly optimized and performing at the top of its game.

How does your site measure up?

Curious as to how your website measures up to the world’s 100 top e-commerce sites? Set up Page Speed Monitoring with a 30-day free trial and find out. You can learn even more about how your visitors actually experience your site with our Visitor Insights end-user monitoring too.