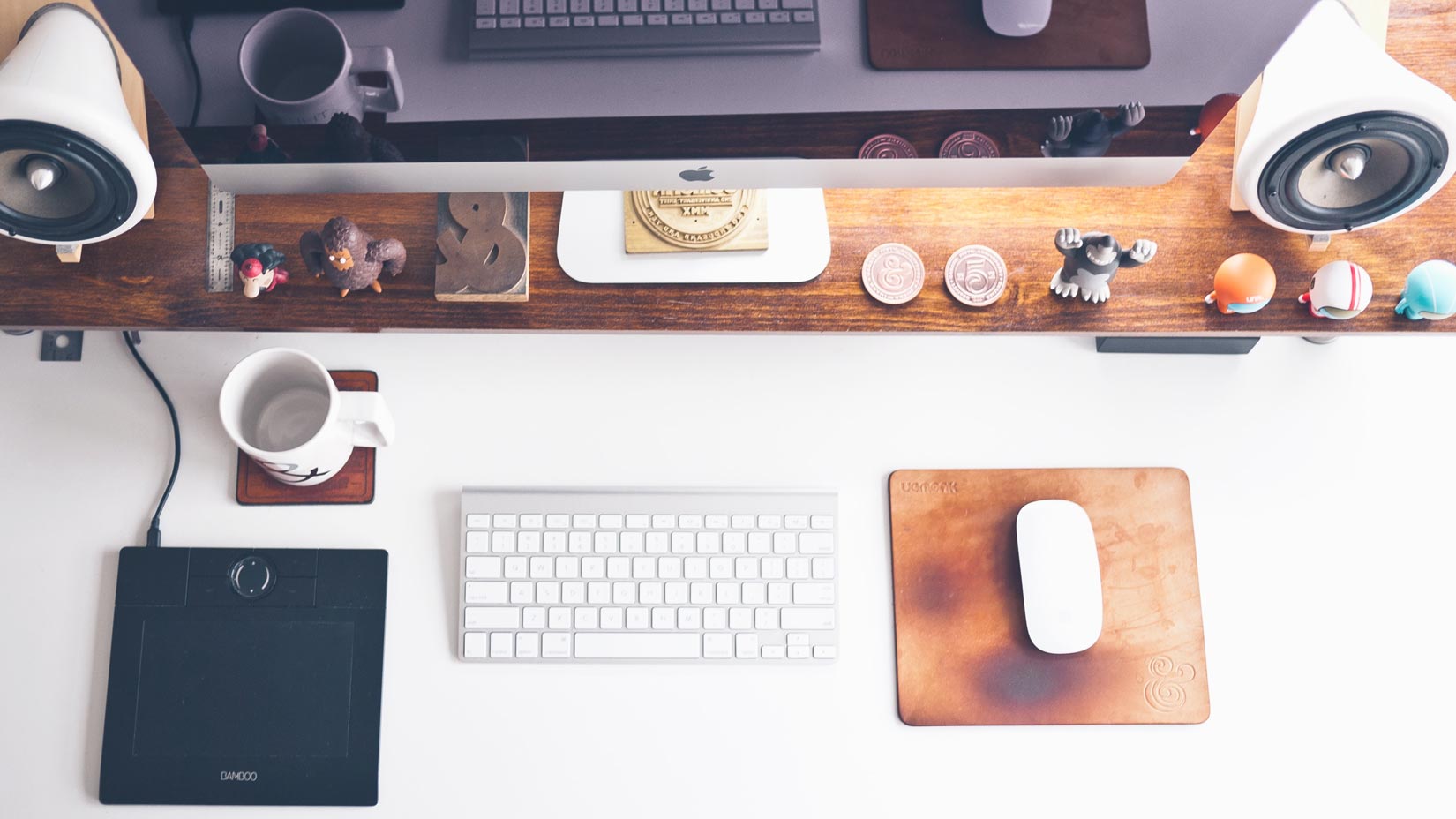 By now you all know that we just love measuring and analyzing the performance of websites here at Pingdom. Last time, we did revisited the web performance of the world’s top 50 blogs. But why stop there? After all, there’s so much more to the Internet than just blogs. That’s why we decided to give the world’s top 50 e-commerce sites (according to Alexa.com) the same treatment, and we’re delighted to share what we’ve discovered with you.

N.B. We tested each page from our nearest test location to provide the most optimal load time for each site. The test was done using Pingdom’s Page Speed Checks every 30 minutes for a week between May 19-26, 2016. As such, all results displayed are the median of all the tests we conducted,

Fastest site loads in under 0.5 second

The fastest website was bhphotovideo.com, followed by hm.com and bestbuy.com. On the other end of that race was taobao.com and yoox.com with an average loading time of 8.32 seconds.

Let’s put it this way: The fastest site could load 18 times in the same amount of time that the slowest sites loaded just once.

Here’s the distribution of loading times in the top 50 e-commerce websites: 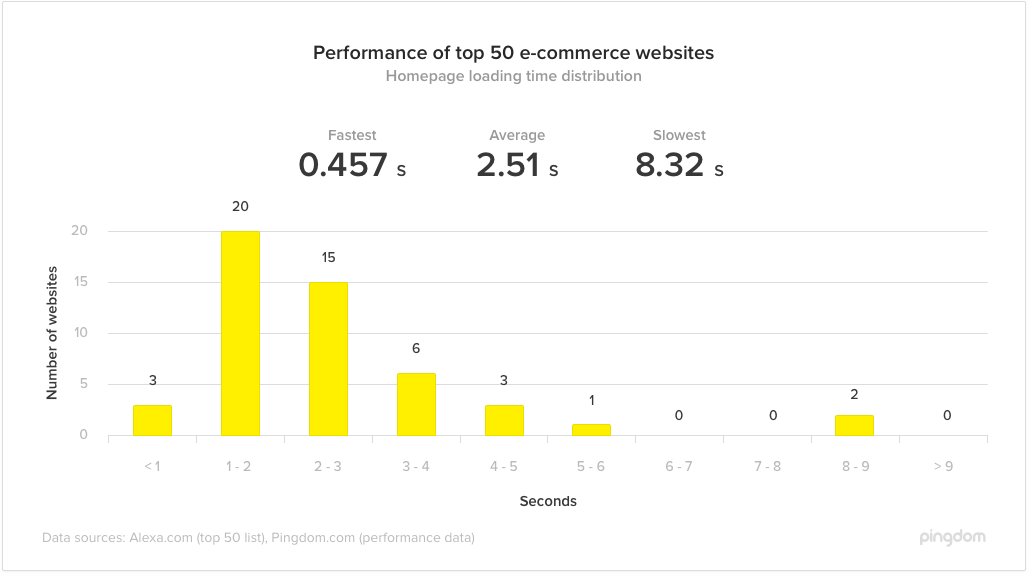 Just under half (23) of the 50 sites we tested ran loaded under the 2-second accepted benchmark for e-commerce sites, with the top performers being bhphotovideo.com, hm.com, and bestbuy.com – all of whom loaded under 1 second. Now, that’s what we call optimized performance!

On the other side of the spectrum, we found that the slowest of the sites we tested took a whopping 8.32 seconds to load: 5.81 seconds slower than the average of all 50! 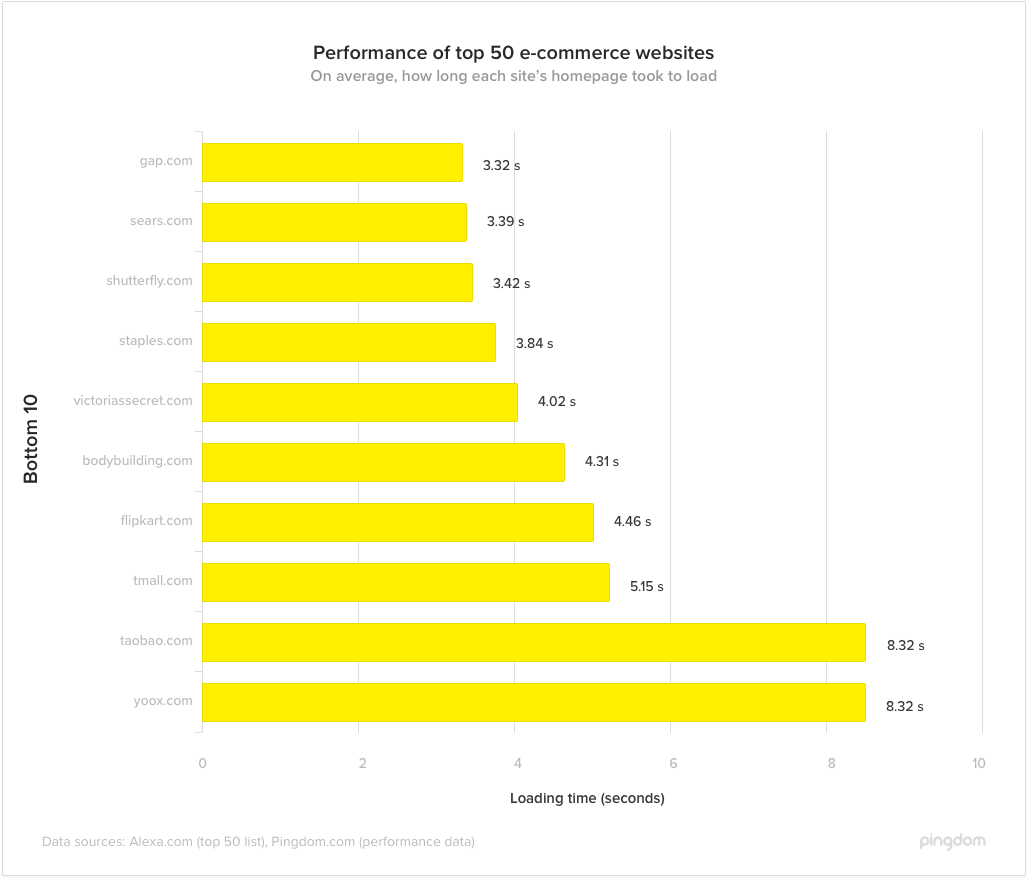 Naturally, we also ran tests to see how large a homepage each of the top 50 e-commerce sites had and discovered that there was a significant range in sizes among them: the smallest coming in at just over half a megabyte (www.tmall.com), to the largest weighing in at just under 10MB (www.rakuten.com.jp). 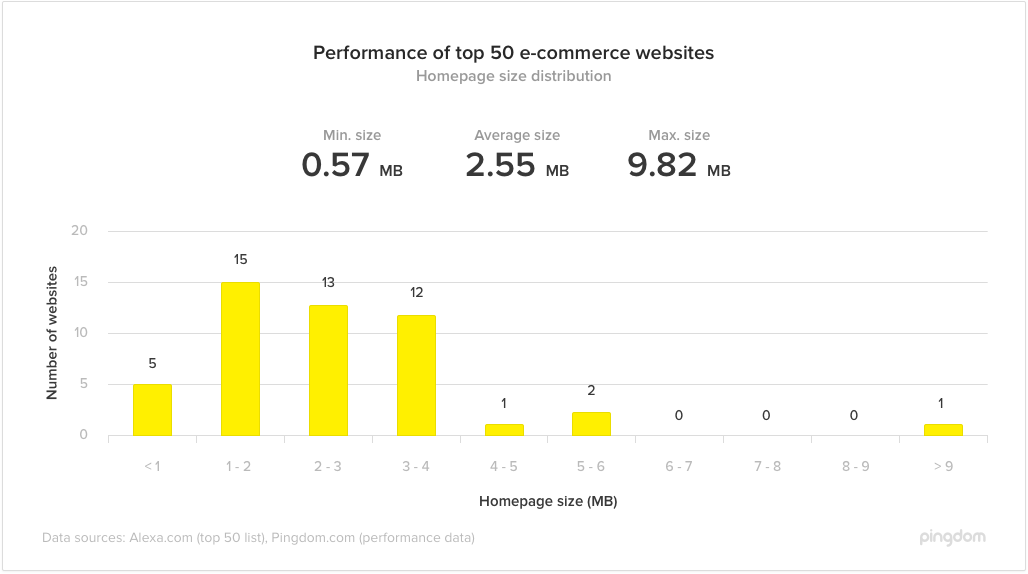 According to the HTTP Archive, benchmark for page size as of May 2016, is 2.46MB and overall 42% (21 of 50) of the top 50 sites succeeded in keeping their homepage’s size below it. However, the overall average size came in at 2.55MB, which only goes to show that even in 2016, there’s work to be done to push page size down.

Interestingly enough, 2 of the 3 slowest sites ranked first and third respectively in terms of lowest page size! Not so surprisingly, top-ranking sites for load speed such as hm.com also ranked highly in terms of having a low page size. 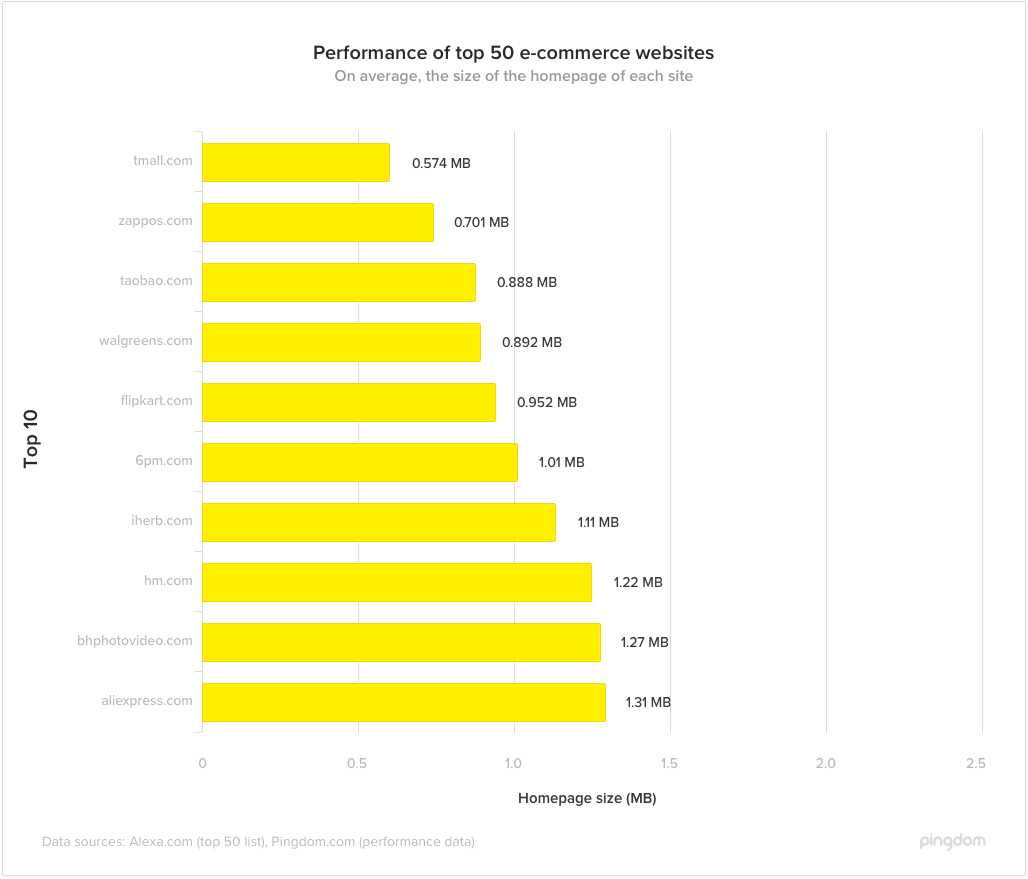 The other side of the coin is that there are still quite a number of sites that fall way over the 2.46MB benchmark: the slowest page we tested rolled in at a staggering 9.82MB. To put that in perspective, you would need 7 floppy disks to save www.rakuten.com.jp (for our younger readers, see here for what a floppy disk is). 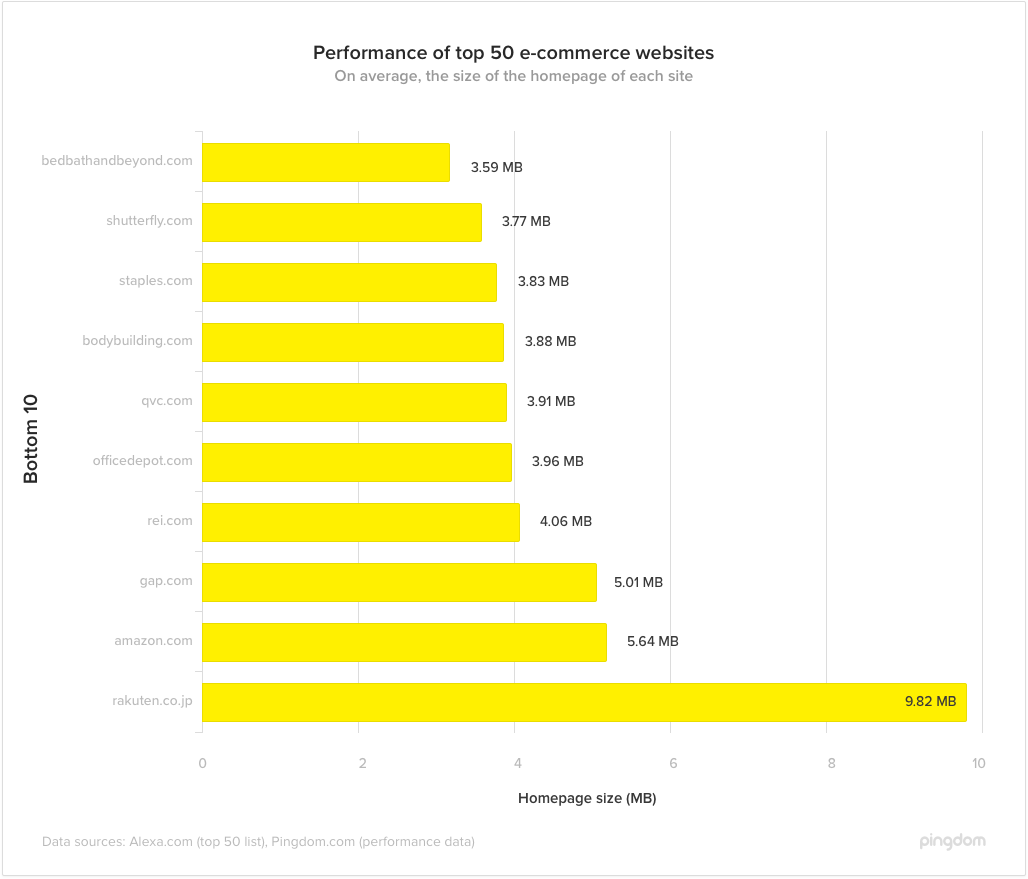 What about number of requests?

Let’s address the number of elements that a site requests when a user loads it in their browser. This would include everything from JavaScript files, CSS files, to images and, well, anything on the site.

The average number of elements loaded by the top 50 e-commerce sites was 169 with 34 out of the 50 loading under 200 elements on their page. Here’s the distribution of the number of requests per site.

Logically, the smallest site of the 50 – tmall.com – also had the lowest number of requests, at just 50 requests, and all of the top 10 sites had well below 100 requests per load. At the other end of the chart we have rakuten.com.jp with a staggering 825 requests. That’s 16.5 times as many requests as the fastest site in our top 50! You could take it as a rule of thumb that the higher the number of requests, the slower the page will load and especially so if each element has not been properly optimized. 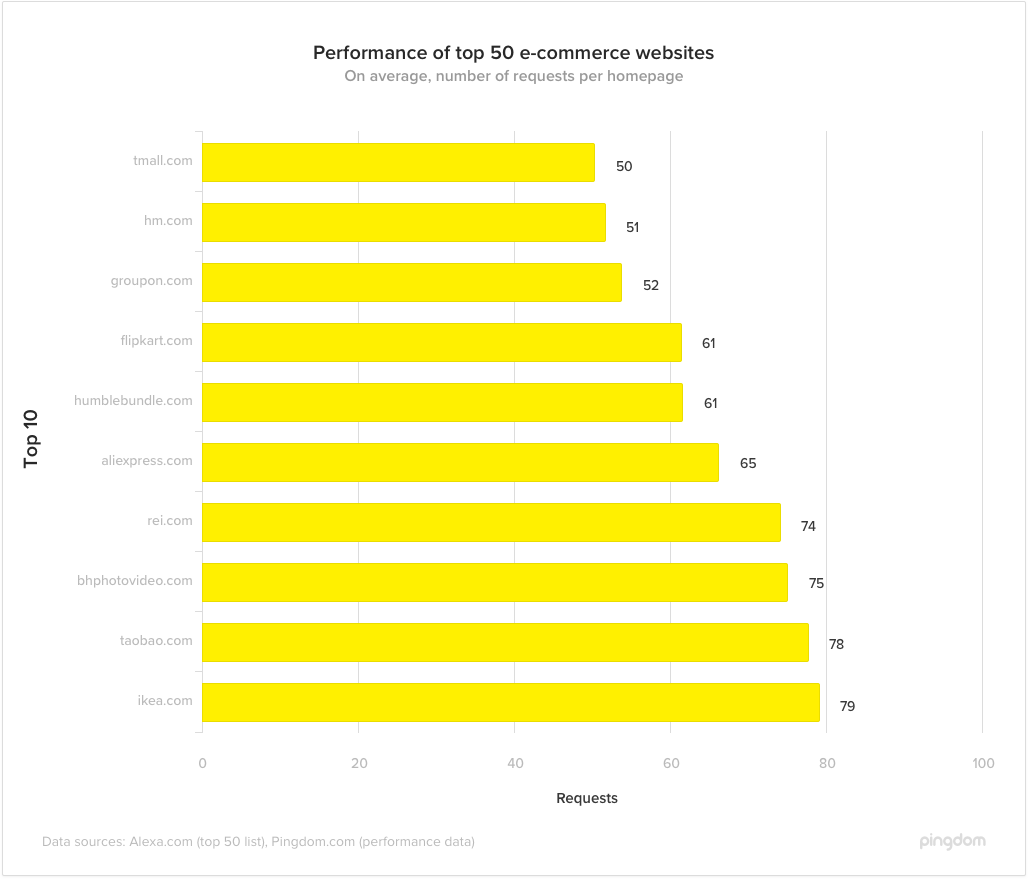 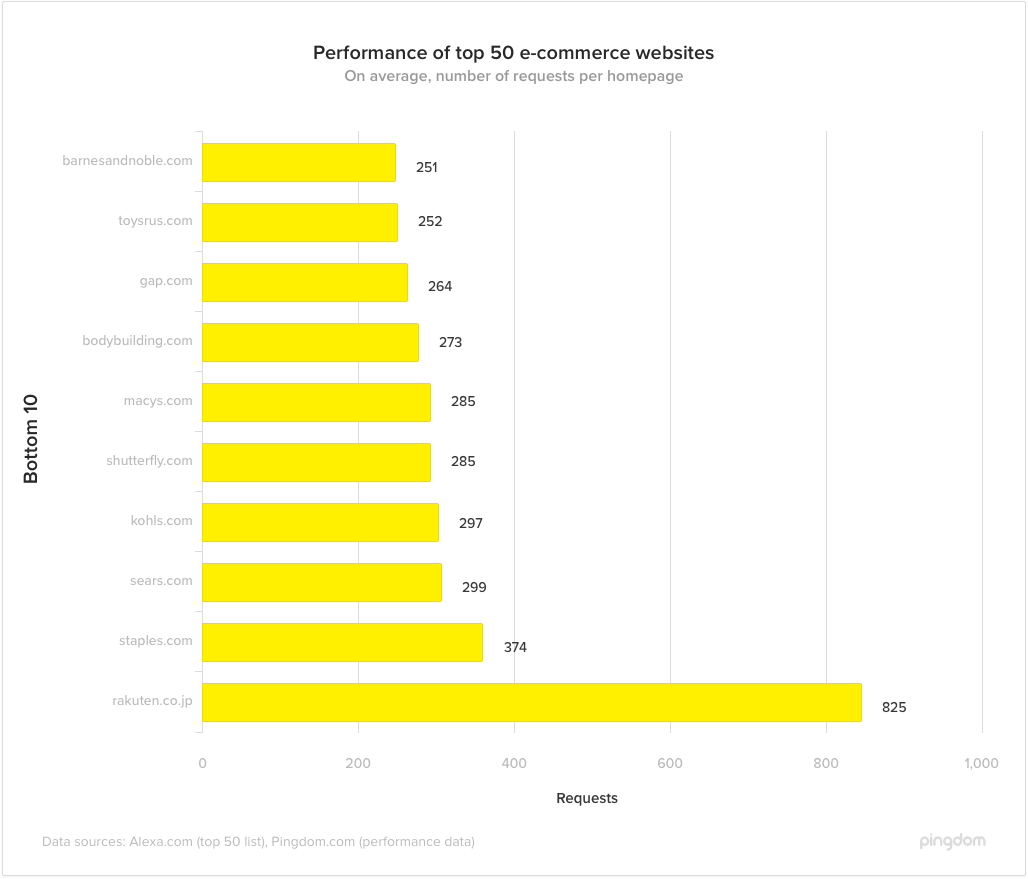 The performance grade tells us how a website conforms to web performance best practices from YSlow. We were a little bit surprised that only one of the top 50 e-commerce sites (bhphotovideo.com) was awarded an overall ‘A’ grade, so hats off to them! In fact, the majority of the sites (31 of 50) received a ‘D’ grade or lower. In fact, bhphotovideo.com was the only site out of all 50 we tested to rank in the top 10 across all tests performed. 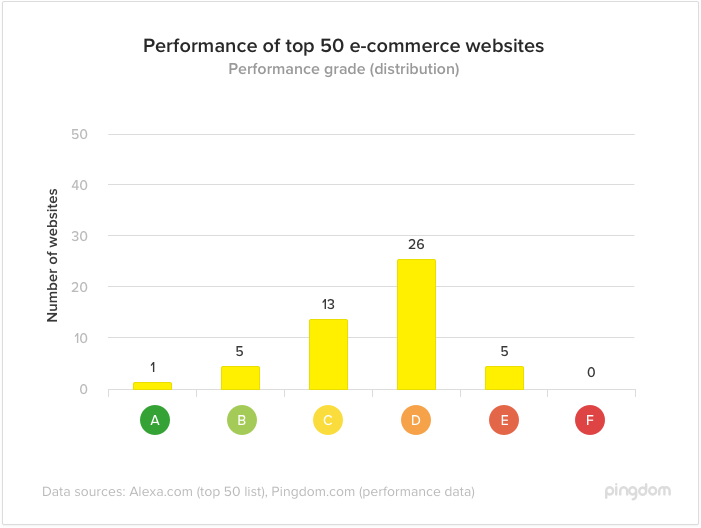 Plenty of room for optimization of web performance

We said in 2012 and we’re not surprised to be saying it again in 2016: whilst we’ve seen some great improvements in overall site load times, there’s still a lot of room for improvement moving forward. Chances are you visit one or more of these sites on a regular basis. Maybe you are even reliant on one for important purchases! Does their speed affect which ones you return to more often than others? The speed of a site plays a major importance in e-commerce, where time really is money, that much we know.

We certainly find it interesting to dig into web performance data like this to get a sense of how these top sites function and what kind of experience you might have when you visit them. If you have an online business, why don’t you run your site through our Page Speed test and see how it compares with the top 50 online retailers?

You can add Page Speed Checks in our dashboard to track performance over time, like we did in this survey. Sign up and have a free 14-day trial to check it out.

PREVIOUS
What We’re Listening To: A Few of Our Favorite Podcasts
NEXT
Post-mortem for recent incidents