HDD or SSD, that is the question. Do you want the speed that the Solid-State Drive offers or the value and storage space the Hard Disk Drive can give you? That is an issue facing many computer buyers today.

Although the price of SSD has fallen quite dramatically recently there is still no doubt that you get a lot more storage space for the money you spend on an HDD. So, when will SSD be as cheap as HDD?

We took a look at how prices for HDD and SSD have developed over the last few years and here’s what we found.

We collected data of HDD and SSD prices going back to 1998 and you can read about our data set at the end of the article. At first glance, the developments for HDD and SSD look very similar although they are separated by 10 years. Here are some key numbers: 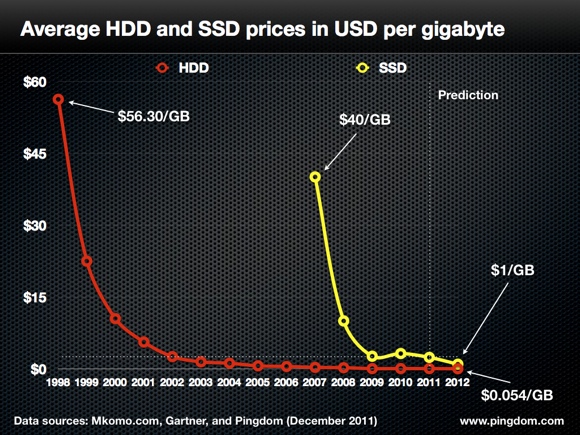 For 2012 we added a prediction for where the average price will be next year. This prediction is based on:

If this prediction comes true, it would bring SSD prices into range of many more consumers and businesses, thereby potentially increasing the market, leading to larger volumes, lower manufacturing costs, and so on.

Will SSD prices ever match HDD?

With regards to the average cost per GB for HDD it is now getting so low – cents rather than dollars – that it’s almost negligible. If the capacity of HDD can keep increasing, the manufacturers will still get a decent price out of such drives. But if capacity can’t keep up with price decreases, HDDs will be all but free in the near future.

But when will average SSD pricing match HDD? Based on our data we cannot predict when that will happen but it’s safe to say it will take a long time, if it ever happens.

We think that customers will keep buying SSD though, given the clear benefits it offers over HDD. And if the prediction we make in this article comes true, it may be that 2012 will be the year of SSD.

Note about the data: We started with the list of HDD prices by Matt Komorowski. Then we sifted through AnandTech and Tom’s Hardware to find prices of drives over the years. This included mainly SSDs but to supplement Matt’s list in the last few years we added HDDs as well. We looked only at internal consumer-oriented drives and added their prices in the year they started selling. In total, included in the chart, we had 171 HDDs and 101 SSDs. The chart is based on the average price for drives in each respective year.