WordPress increases its domination of the top 100 blogs

WordPress is strengthening its position as the dominating blogging platform or Content Management System (CMS) used by the world’s top 100 blogs. This year, WordPress is used by 52% of the top blogs, up from the 48% we identified in our study in 2012.

With over 65 million WordPress sites in the world, it’s clear that Automattic’s platform is popular. But let’s have a look at the entire top 100.

WordPress keeps on gaining in popularity

We grabbed the list of the top 100 blogs in the world from Technorati and tried to identify which blogging platform or CMS the site is using. Out of the 100 blogs, we could identify and verify the platform in use by 94 of the sites. For the other 6, we could not ourselves confirm the platform, nor did we get any replies from the sites when reaching out to them. You can read more about our methodology at the end of the article.

Here is the result of our 2013 study of the blogging platforms used by the top 100 blogs: 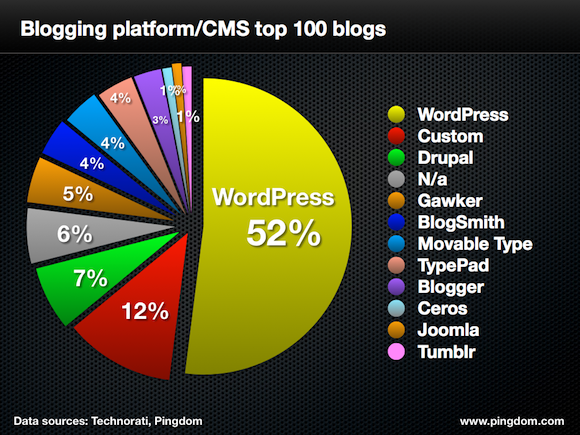 You can also download a larger version of this chart.

Here are a few comments about what’s happened since our last study in 2012:

And here are the aggregated results, including a comparison to 2012:

Here is the complete list of the top 100 blogs, presented in order of Technorati rank:

We’d like to send a big thank you to everyone that helped us out with this article. You are too many to mention, but we truly appreciate your help.

There’s no denying that blogging has changed in the last few years, especially with the arrival of social media like Facebook and Twitter. For many of us, what we used to blog about we now publish to social networks.

But there’s also no denying that blogging is not gone. It has, however, changed as has the tools used to publish blogs with. Some, like WordPress, started out as blogging platforms and has taken on more general content management functionality. Others have developed in the opposite direction. Even though we believe it will be increasingly hard to distinguish what is a blogging platform we are certainly interested in following the developments. Therefore, we already look forward to doing the same study next year again.

Which platform do you use and why? Let us know in the comments below.

Methodology: Since the Technorati Top 100 is updated every day, we froze our list on March 20, 2013, and then set out to investigate what blogging platform or CMS each site is using. For each site, we started by using third-party services like BuiltWith and Wappalyzer, to see if they would reveal anything about the site. If that did not give us any results, we proceeded with tools like host, whois, and dig. Only if that still didn’t tell us what we needed, did we get in touch with the site through contact details published. Out of the 100 sites we were unable to get confirmation for 6 sites.