The Swedish company Bahnhof has presented two suggestions for how to turn a 19th century gasometer into a 21st century high tech data center. If these plans become reality, the new data center would arguably be one of the coolest ones anywhere in the world.

Besides being über cool, the proposed data center would also have another interesting twist to it: a clever use for the significant heat generated by its computers.

And since Bahnhof has been a part of designing data centers fit for James Bond villains in the past, there’s every chance that the proposals will become reality.

The origins of the gasometer

A gasometer is quite simply a large container in which different types of gas is stored. In this case, the gasometer in question stored coal gas. It’s located in Stockholm, Sweden, and it became operational in 1893. Above: The coal gas plant with the old gasometer in the background (the big round building in the middle). This was taken sometime between 1908 and 1910. Above: The gasometer is located in what was, at the end of the 19th century, the outer parts of Stockholm. Above: Part of the interior of the coal gas plant in 1903.

Different types of gases are still being stored in the plant, but the gasometer that may be turned into a datacenter has not been in use since the 1960s. It has not yet been decided by the city of Stockholm, the owner of the building, what will become of it. There are several options on the table, including the data center one. Above: As you can see above, there are not one but two old gasometers in the area. The “new” one in the background was built in 1900. It’s the one on the right that may be turned into a data center. 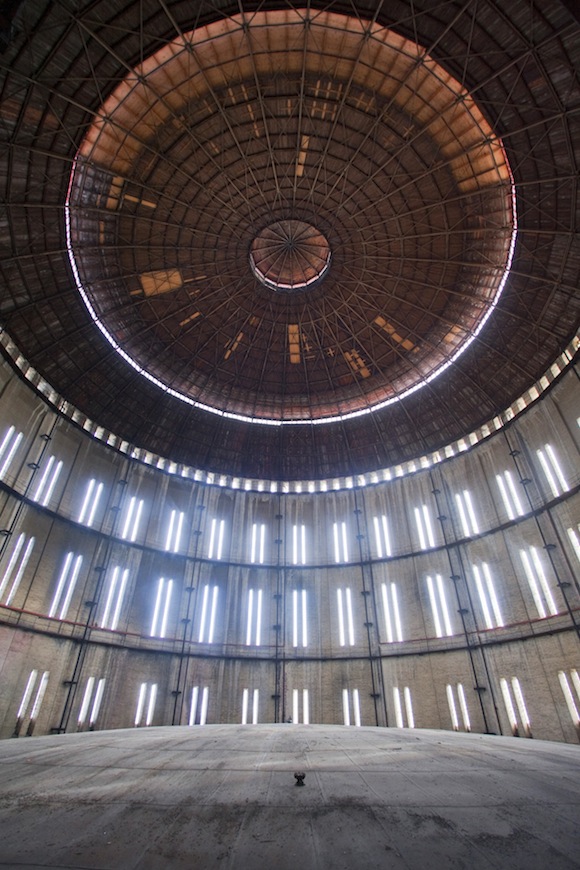 Above: It’s pretty impressive to look up at the 120 year old ceiling. Above: There are not much other than the walls left from the gasometers past life.

Facts about the gasometer and the proposed data center

There are two proposals put together by two different architectural firms. They both includes some public spaces, according to a wish made by the city of Stockholm. The idea is that even though the building would mainly be a data center, the public should also be able to access to the old building. Above: The person standing at the bottom floor of the gasometer certainly gives you some perspective of its size. Above: The glass walls, and the fact that you can see all the way up to the ceiling, is a nice way of holding on to the architecture of the old building. Above: Would you agree that it looks more like a scene out of a futuristic movie than a data center? Above: A dance performance looks elegant, but wouldn’t a concert with Kraftwerk be more suitable? Above: The second proposal looks much more open inside the gasometer compared to the first one. Above: The entrance is located right inbetween the servers. Above: The conference area on the third floor would be perfect for any company’s get together.

Above: As in the first proposal, the glass walls certainly give you a feeling of the amount of space inside the old building.

Cool, but is it cost effective?

Although this is a spectacularly cool project, we can’t help but wonder about the financial aspects of the gasometer data center. Therefore, we spoke to Jon Karlung, the CEO at Bahnhof, to get some insights into his thinking concerning the proposals.

Is there a high price to pay for a data center with such grand design, we asked. According to Karlung it is actually the other way around. The plans for the gasometer are more cost effective than building a brand new data center, claimed Karlung. This is in large part because they use the existing buildings instead of building new ones, he said.

But the main saving over the long term lies in a new cooling technology. For the gasometer data center, Bahnhof will cooperate with an energy corporation, which will use the heat generated by the servers to heat up Stockholm.

So while Google is choosing the north of Finland and Facebook the north of Sweden for their data centers, Bahnhof has chosen a central place in Stockholm. This is because to be able to use this technology requires a city with a population that is big enough, and it needs to have the necessary infrastructure. According to Karlung, this can only be found in Gothenburg and Stockholm, the two largest cities in Sweden.

More cool datacenters out there?

We think you will agree with us that this represents a combination of old industrial architecture and the latest high tech technology, all blended together in a unique way.

As you might have discovered, we love cool plans like the gasometer proposals.  There are far too many ordinary and slightly boring data centers already. So if you know of any other data centers like this one, please let us know.

Images: The black and white pictures by Stockholmskällan. Pictures from outside the gasometer and the new plans by Bahnhof.