Report: The most common web browsers and browser versions today

The web browser market is an ever-changing landscape. It can sometimes be rocky ground for web designers and web developers trying to make their websites and services work for all the various browser versions available out there. It’s challenging work, to say the least.

That’s why it pays to be aware of what the web browser market looks like, and stay up to date. How many are using the various browsers out there? How many are using the latest versions? Which versions are the most common? How big an audience may you be annoying if your site isn’t perfect in a specific browser version?

Those are all questions you’ll want to answer, and here is what the situation looks like right now, in June 2011, based on the traffic to more than three million websites and billions of page views.

The most common web browser versions

We’ve included every single browser version that has 0.2% market share or more. The data is from StatCounter and is based on visitor statistics from more than three million websites for the first half of June. According to StatCounter their monthly sample size exceeds 15 billion page views, so the data here should be a good international average across websites. 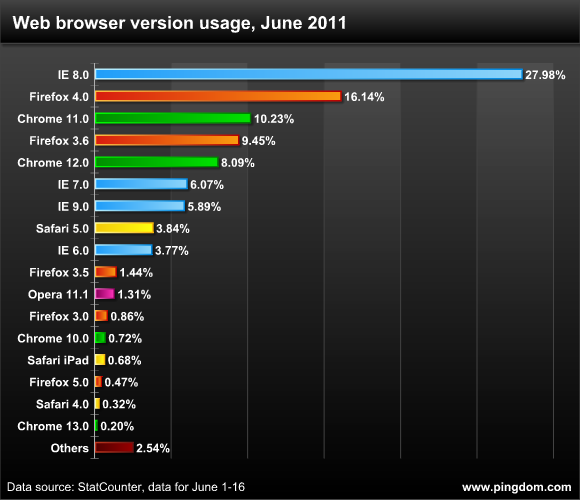 Now on to examining how browsers are doing if you ignore the individual versions (which you probably shouldn’t, but it’s an interesting data point).

The most common browsers

So what is the overall situation per browser, regardless of version?

Don’t forget your own site stats

Hopefully you’ve found this report helpful, but let us give you some final advice. It’s something you are hopefully already doing if you’re a web developer or designer, but a reminder couldn’t hurt.

If you’re designing for an existing website, it’s great to keep the above information above in mind, but don’t forget your site-specific “visitor profile.” In other words, you should of course also look at your own website’s visitor stats to see which browsers they tend to use. That can differ significantly depending on your audience.

That said, as soon as you’re designing something that you want accessible to as wide an audience as possible, the overall stats that we presented in this article becomes a very good thing to keep in mind.

PREVIOUS
IE9 adoption is painfully slow. Google to the rescue?
NEXT
Pingdom notifier for Mac