We know that there are approximately two billion Internet users in the world, but how are they distributed? More specifically, how are they spread over the world’s time zones? The world population isn’t spread evenly, and neither is the Internet population.

We couldn’t find this information anywhere, so we collected the data ourselves and did the necessary calculations to be able to put together this chart. We hope you will find it useful.

To learn more in detail what we did (methodology, etc.), check out the “How we did it” section below. 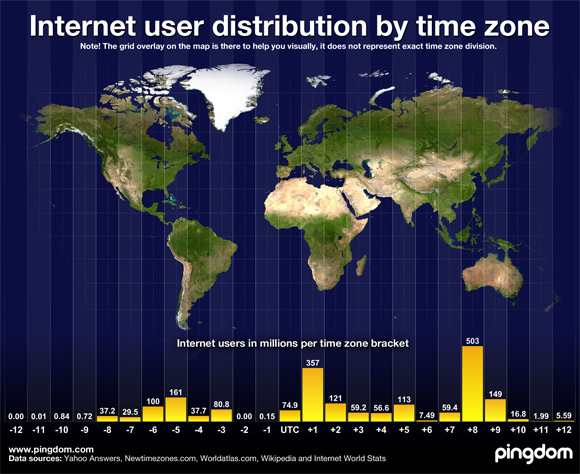 Notes about the infographic: The time zones shown also include any “uneven” time zones, e.g. UTC+5½ is included in the UTC+5 group. That’s why we call them “time zone brackets.” It’s also worth noting that the grid we added on top of the map is simply there to help you orient yourself a bit in relation to the chart at the bottom, it won’t show you exactly which countries belong to certain time zones (the real world is messier). The yellow diagram at the bottom, however, is exact. For a map of the full time zone mess, here is a great one. And if you’re wondering, UTC and GMT is basically the same thing.

Some things we learned from this survey

A closer look at the United States

If you’re curious about the distribution of Internet users in the United States (we thought you might be), here it is:

In addition to that, Alaska (UTC-9) and Hawaii (UTC-10) together make up roughly 1.4 million Internet users.

The division is based on how the US population is distributed across the nation, so it will only be an estimate (Internet penetration won’t be uniform across the country). But it should be pretty close.

How we did it, the gritty details

Putting this data together was a bit tricky, but we went about it as meticulously as we could. Essentially we have just combined the number of Internet users per country with the time zone(s) used by each country, but it’s deceptively simple.

In those cases where countries span several time zones (for example Canada, USA, Russia, Australia and Indonesia), we did our best to divide the contribution they made to each time zone based on the population distribution inside the country. In some cases these statistics were already available, in some other cases we had to estimate.

In addition to this, time zones really are a bit of a mess, with many countries adding or subtracting half hours and even quarter hours instead of full hours. To make the data more presentable, we’ve grouped all time zones into one-hour brackets. For example, UTC+5½ (used in India) went into the UTC+5 bracket. If we hadn’t done this, the chart would have been pretty much useless.

There are some island nations in the Pacific Ocean that use the time zones UTC+13 and UTC+14, amassing a few thousand Internet users in total. We didn’t include that data in this chart.

To not go insane we focused on standard time zones. We completely ignored daylight savings time and all the quirks that come with it.

Data sources: Wikipedia was a great help for time zone information and also provided us with the public domain map you see in the background of the infographic. Internet user numbers per country came from Internet World Stats. Population divided by time zone: for USA and Canada from Newtimezones.com (PDF), for Australia from Yahoo Answers, for Russia partly from Worldatlas.com.