How Apple reinvented the laptop

Apple is often referred to as a design leader. Since Steve Jobs came back and took over the company in 1997, the focus and inventiveness shown by Apple’s industrial design team has been remarkable.

Apple’s design prowess has greatly influenced the evolution of the common laptop over the past 10+ years. The company has gone from being a marginal player in that market to become one of the biggest, most popular laptop manufacturers in the world.

That success has of course bred imitation from other laptop makers, some subtle, some not so subtle. Would today’s laptops be as slick and beautiful without the influence from Apple? Most likely not.

This post will look back at how Apple’s laptops have evolved over the past decade (well, since 1999). We’ve only included the “landmark” models, the ones introducing really big design changes. We chose to focus on design, not on hardware specs or features, although Apple has made significant contributions in those areas as well.

Also known as the “Clamshell,” the iBook G3 was meant as a low-end option to Apple’s PowerBook line. If you remember the original iMac desktop computer, you’ll see how it mirrors its rounded, colorful design. Just like the original iMac, the iBook G3 was available in multiple colors. As all Macs of this era it used the PowerPC CPU (Apple didn’t switch to Intel until 2006), in this one the G3, hence the name. The 2001 model of the iBook was arguably much less out there design-wise than the Clamshell, but had a more efficient and compact design. It was much lighter and smaller than the original iBook. Gone were also the playful colors. You could get it in any color you wanted, as long as it was white.

There would also be an iBook G4 which continued this style, introduced in 2003 and updated until it was discontinued in 2006. It replaced the white, slightly translucent casing with one that was completely opaque (but still white). Although the PowerBook line had been available since 1991, the familiar metallic titanium design arrived with the PowerBook G4 in 2001. Steve Jobs intended this to be a completely reinvented PowerBook, and it delivered. From being a black and rather chunky device (a typical laptop of the late 1990s), the PowerBook suddenly became sleek and elegant. It was also one of the very first widescreen laptops available to consumers.

Where iBook was meant as the more affordable consumer option, the PowerBook line was meant for demanding customers. This was right in line with Apple’s plan to have one high-end and one low-end entry in the laptop and desktop computer markets. 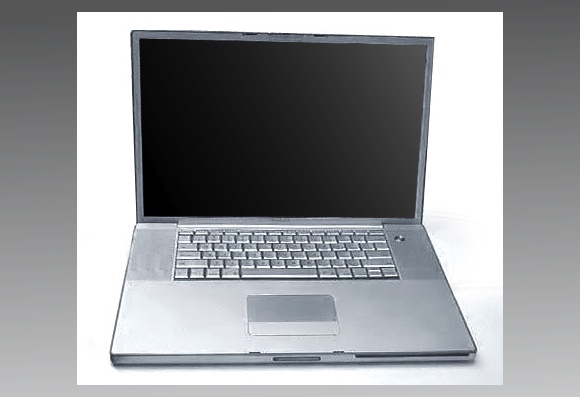 The 2003 PowerBook G4 was the year Apple went aluminum. The Aluminum PowerBook G4 also introduced the backlit keyboard which has been present in most of Apple’s laptops ever since.

2006 was the year Apple made the switch to using Intel CPUs in its computers. With this switch also came the retirement of the iBook and PowerBook series, which were replaced by the MacBook and MacBook Pro series.

The MacBook Pro carried the torch from the PowerBook, and the initial 2006 design was basically just a carry-over from the PowerBook, with a few design tweaks. (That’s why we didn’t include pictures here, it was very similar to the Aluminum PowerBook G4, but with an Intel CPU inside).

In 2008, Apple completely abandoned its black and white plastic casings for MacBook, essentially making the lower-end unibody aluminum MacBook Pro its new MacBook. The company would later briefly reintroduce a unibody polycarbonate version, which was scrapped after a year.

In 2008, Apple introduced the now famous aluminum unibody style (i.e. the body is carved out of a single block of aluminum) for its MacBook Pro line. This made the laptops not just sleeker, but made them very sturdy as well. The use of unibody designs has lasted until today and is now a typical Apple design trait which has also carried over into several other Apple products. Designed to be as thin and light and portable as possible, the original MacBook Air wasn’t quite the success Apple probably would have liked. In retrospect, however, it is clear that this was just the first step in another reinvention of the laptop.

While the first MacBook Air was often viewed as underpowered, the technology available finally caught up with Apple’s vision in 2011, when it became a raging success.

They do say that imitation is the sincerest form of flattery… Well, Apple, consider yourself flattered.

Just look at recent laptops and so-called ultrabooks from the likes of Samsung, HP, Acer, LG, Asus, Dell and many others. They all borrow significantly from Apple’s design language.

To illustrate, none of the following are Apple laptops: We could have included many more, but those should be enough to get the point across, we think.

A final note, and a final image

Before someone blows a gasket, Apple of course didn’t reinvent the modern laptop all on its own. The company certainly doesn’t operate in a vacuum. That’s what’s so great about a market with lots of competition. That said, you’d be hard pressed to point out any other company that has done more for the evolution of laptops over the past decade.

Although much has been said about Steve Jobs’s contribution to Apple’s success, we should not forget to credit Apple’s industrial design maestro, Jonathan Ive. And we’re sure there are plenty of unsung heroes in this story as well. There usually are.

Finally, just one more image, in case you had any doubts whatsoever about how cool this unibody thing actually is. It’s a shot of a stripped MacBook Air. As if a crustacean had just walked away from its shell…

Data and image sources: Apple, Wikipedia. The exception here being the non-Apple pics, which come from their respective manufacturers.