The biggest and busiest languages on Wikipedia

Wikipedia is a treasure trove of information, and we at Pingdom use it extensively on a daily basis.

The English Wikipedia is the one we most commonly use, as may be the case with you as well.

But are you aware of all the Wikipedias in different languages that are available? And which language has the most articles?

Let’s dig into the numbers.

Wikipedia is truly an invaluable resource, used every day by millions of users around the world. Chances are that whatever language you speak, there is a Wikipedia just for that language. In fact, there are currently Wikipedias in 285 different languages, more than there are countries in the world.

As you would expect, not all of them contain the same number of articles. The range is indeed enormous, from wikipedias with millions of articles, to those with just a few thousand.

Here are the 20 biggest languages on Wikipedia ranked by number of articles: 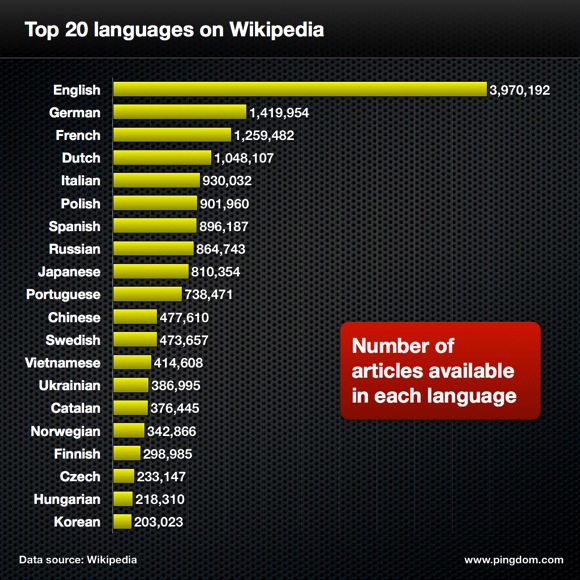 To put these numbers in perspective, Encyclopædia Britannica (online) has just 120,000 articles.

As you can see, English has a big lead with almost 4 million articles, followed by German with 1.4 million, French with over 1.2 million, and Dutch with just over 1 million. In 20th place is Korean with around 203,000 articles.

Currently, the smallest Wikipedia is Kanuri with only 1 article, at least so far.

Languages with the most native speakers

But just because a language has the most number of articles on Wikipedia doesn’t mean it’s the language spoken by the largest number of people in the world.

Here are the 20 biggest languages in the world, ranked by number of native speakers: 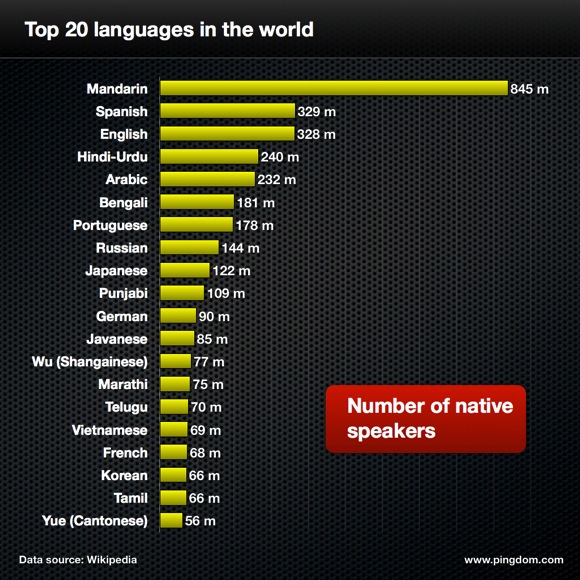 As you would expect, Mandarin is in the clear lead, with more than twice the number of native speakers than the number two language, Spanish.

We wanted to add an element of activity to the comparison between languages. For that, we grabbed the statistics for how many times on average each article in the various wikipedias has been edited. We did this for the list of the top 20 languages in the world: 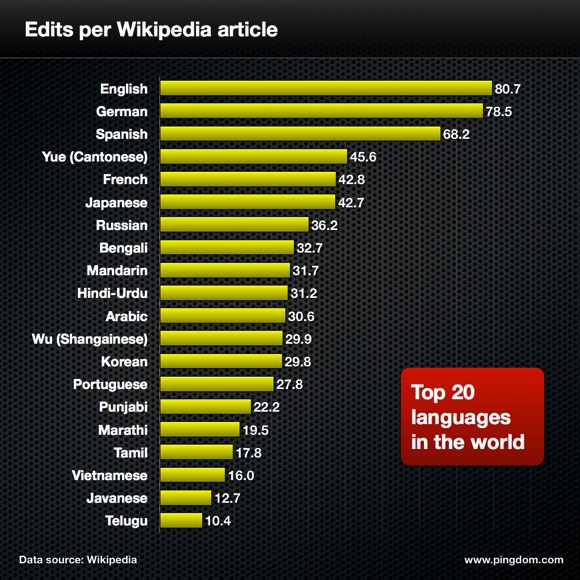 English and German top the list, meaning articles in those wikipedias receive on average the most edits. Note that these are also the two biggest wikipedias when looking at number of articles.

The length of time each wikipedia has been available probably also plays in as a factor here, we assume, as does other factors like Internet penetration.

When we instead look at number of edits in relation to the number of people speaking each of the most common languages in the world, the picture becomes even more interesting. In this comparison, German rises to the top with close to 1 edit per article and million native speakers. It would seem that the users who speak German are the most active on Wikipedia when it comes to editing articles.

Yue (Cantonese) is not far behind German in activity, but English comes in at 9th place, with just 0.25 edit per article and million native speakers. Mandarin, with such a large number of native speakers, understandably scores very low in this comparison.

Wikipedia is complex and fascinating

This little dip into some of the statistics of Wikipedia is just a small taster of everything there is to learn about this amazing project.

We certainly hope to come back and scrutinize some other aspects of Wikipedia in the future.

What are some of your favorite things about Wikipedia? Share with us in the comments below.

Data sources: native speakers, number of articles and edits (gold star to you if you guess the sources before clicking on the links 🙂 )