The 20 most valuable tech companies

Have you ever wondered which tech companies are the most valuable in the world? We have, so we decided to find out.

We looked at the market capitalization, i.e. the total value of all shares in each company. Since the data source we used was Google Finance, we got all companies in the technology sector that are traded in the United States, which also includes many of the larger non-US companies. In other words, this list is pretty close to a worldwide top 20. 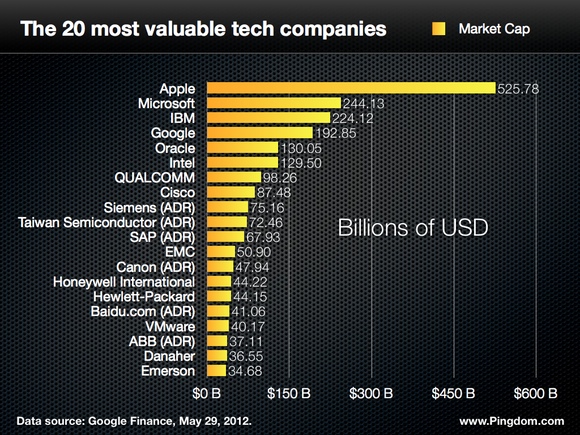 Update: Some of you have asked why Facebook isn’t on this list. You’re right, it should be (at least for now). For some reason, maybe because it’s such a new arrival on the stock market, it wasn’t included in the list of technology companies on Google Finance, which is what we based this on. Facebook’s current market cap is $61.66 billion, which would put it in 12th position.

ADR, if you’re wondering what that is, stands for American Depositary Receipt. It’s how non-US companies are represented and traded in the United States, in US dollars.

So, looking at these numbers, it feels like we still have some ways to go with Pingdom…