Do you use Lynx? If so, you’re one of a rather small minority that use the text-only web browser, which predates even the world wide web. Although it is still perfectly usable for most websites, the lack of graphics makes Lynx less than desirable for most users today.

But our curiosity got the better of us, and we wanted to find out how useful Lynx would be to browse some of today’s top websites. This is the sort of exercise that gives you a warm geeky feeling inside. 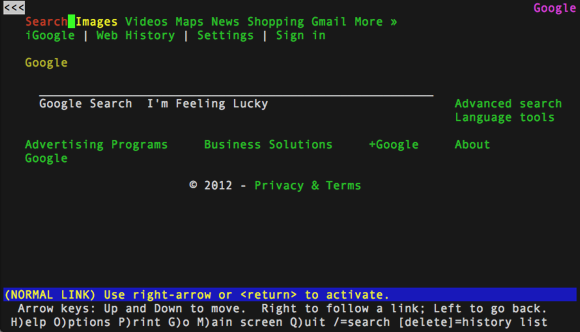 Out of the sites we tested Google.com is the most functional. The homepage fits in a regular 80×24 character terminal screen, and you can type in what you want to find and search for it.

The search results could perhaps be presented in a bit better way, but nonetheless, the site is perfectly usable with Lynx. 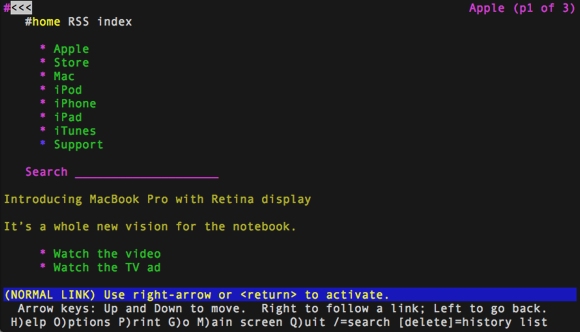 You would be excused for thinking that the image and video heavy Apple.com site would be useless with Lynx, but, surprise, you’d be wrong. Looking at the specifications, for example, of its latest MacBook Pro is no problem. Now, when it comes to shopping online with Lynx, that’s a whole other ballgame (hint: don’t bother trying). Right when you arrive at Facebook’s homepage it tells you “You’re using a web browser we don’t support.” That’s at least honest and upfront. But that’s as far as you go as you can’t log in. We decided to throw in New York Times in our test to see how it fared with Lynx. The answer is not too badly. Reading articles with Lynx works okay, but the pages become very long, with the menus especially taking up a lot of space. Tumblr is a site clearly not built for Lynx users as you can’t log in. To be fair, using a text-only browser for Tumblr may not be the brightest idea ever. But it would be nice to be able to log in to your account and post an update, at least. Twitter warns that its site “makes heavy use of JavaScript,” but that shouldn’t deter potential Lynx users. Or should it? We couldn’t figure out how to post a new tweet, nor did we get replying worked out. The best you can hope for then is catching up with your Twitter stream then. Scanning the latest headlines on the CNN.com homepage works pretty well with Lynx. But if you want to browse around and read articles, be prepared to scroll past a lot of stuff at the beginning of each page before you get to the actual content. 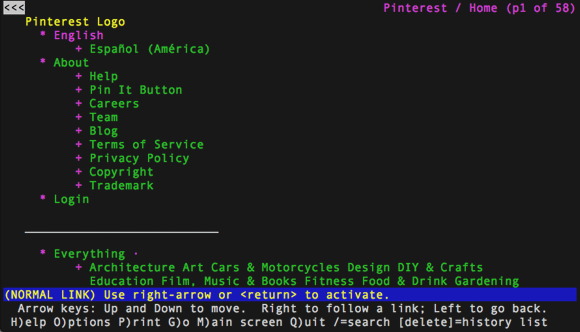 Yes, we saved the worst until now, because, if you can’t see any pictures, what’s the point of visiting Pinterest? Login doesn’t seem to work, but that’s a moot point anyway, given the purpose of the site. Although we wouldn’t call browsing around on Wikipedia with Lynx a pleasant experience, necessarily, it works. That’s perhaps not surprising given that it’s primarily a text-based site.

Last but in no way least in our brief survey of using some of the world’s top sites is Amazon.com. Short verdict: it works! We could search for items and even log in to our account and see purchase history, and more.

After having attacked these ten sites with Lynx, our conclusion can only be that it worked better than we had anticipated. Not all the sites are usable with Lynx, but many of them offer at least basic functionality using the text-only web browser.

Being the geeks we are, we’d almost like to shout “Lynx FTW” from the rooftops. It’s not that we’ll all switch now to Lynx as our main web browser, but it’s nice to know that a text-only browser works this well still today.

Do you know of any particularly Lynx-friendly or unfriendly sites? Share them with us in the comments.

PREVIOUS
Cloud storage shoot-out: Google Drive vs. Dropbox vs. SkyDrive vs. Box
NEXT
Every sysadmin needs a little SysRq magic