The world of computing was very different back in the 1960s. For one, there were not that many computers around. The Digital computer census for April 1962 tallied only “14,000 installations of digital computers” in the U.S. So the computers were few but they certainly weren’t small, as you can see in these computer ads from around 50 years ago.

Having looked at hundreds of ads working on this article, we can’t help but feel that the computer industry back then really could have used Don Draper and his Mad Men (and women). At least some of these ads would probably have turned out quite differently if Don was involved. What do you think?

A computer on a truck

Who would not want a “tactical computer” weighing almost 280kg (609lbs)? However, rest assured because it can be “mounted on a 21/2-ton truck” making it is portable to some degree. And best of all, even if the truck might be moving around on some rough terrain, the Basicpac system is “solid state.” 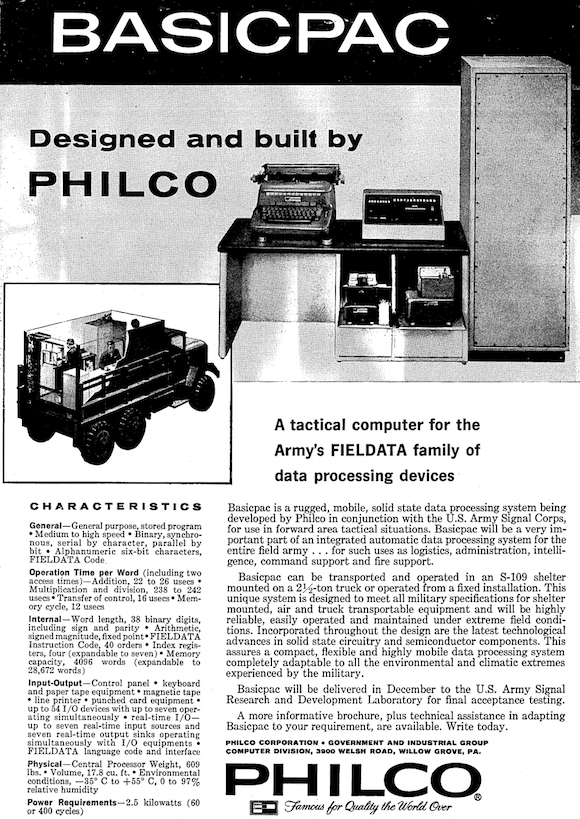 Continuing on the automotive theme, why not buy your computer memory from the company that Henry Ford built? The Ford Motor company’s Aeronutronic’s division (say that 10 times fast if you can) advertised the Biax Instruction Memories in 1961. The specifications included up to 1,024 words and up to 36 bits per word. You’d be forgiven to think that this looks like a music LP if you even remember what that is. It’s a 7-inch disc with a capacity of 440,000 bits. Quick math: that is 55kB. According to the Reeves Soundcraft Corp. it was a “world record for magnetic data storage” in 1962. 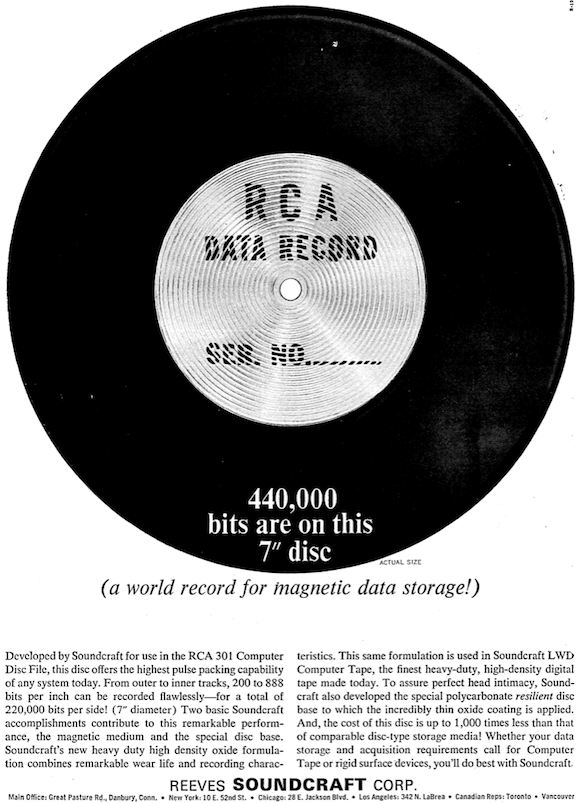 We’re used to plug-ins today, for browsers and other software, at least. And adding storage to a server in the cloud is just a click away. But in 1968, adding a thousand characters to a memory drum was probably a rather amazing feat. Do you count on Mylar?

If you don’t know about the advantages of tapes of Mylar, apparently you’re a raw novice, according to Du Pont in 1964. So, if you want to add some storage to your computer, “count on Mylar.” 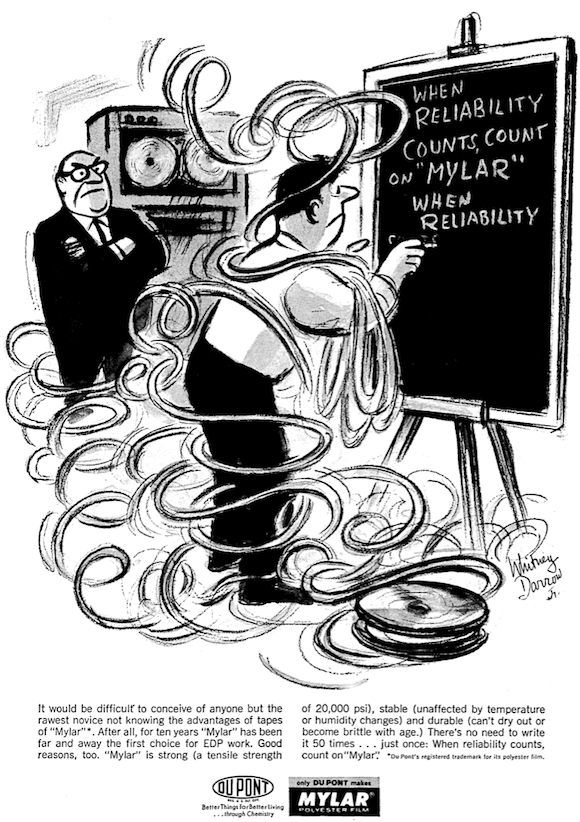 Computers talking to one another

Imagine computers talking to one another over long distances. Wait, we have that and it’s called the Internet. But in 1962 Bell Telephone System marketed the Bell System Data-Phone service, which made possible “machine talk.” With it, computers got a “voice,” and what took a secretary 7 hours to type was handled in 10 minutes by the Data-Phone service. 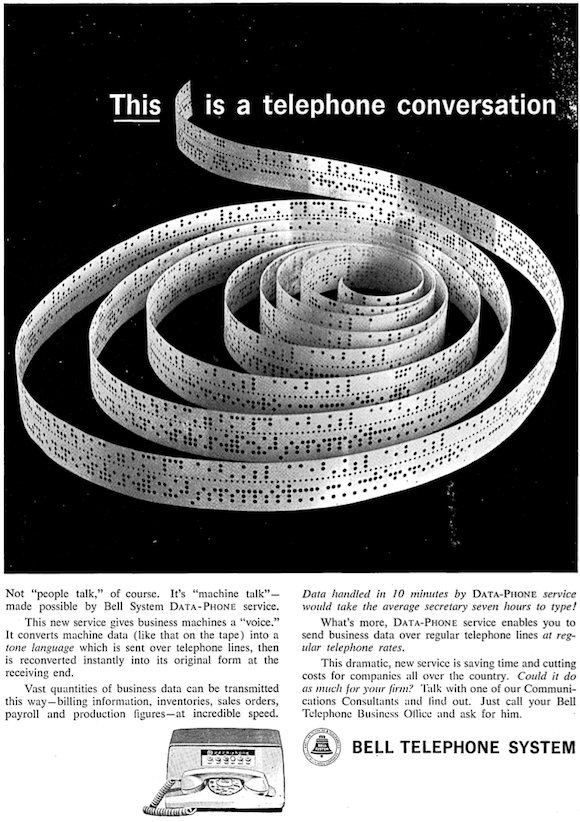 The RCA Octoputer can boost programming efficiency by 40%, claims this ad from 1969. Really called by the much less exciting name RCA Spectra 70/46, the Octoputer points out mistakes the programmer makes as they are made. 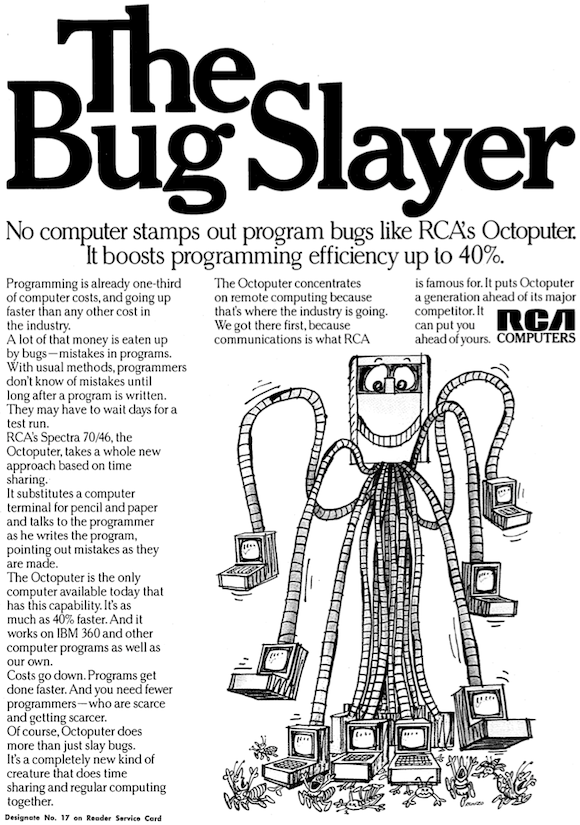 You never change a bit

In a strange sort of 2001-esque voice (think HAL 9000), a Computape says to Penelope, “you’re exactly right. One can’t change a bit if one expects to run around with computers all day.” Boasting “556 or 800 bits per inch,” the Computape by Computron must have been quite the Casanova. 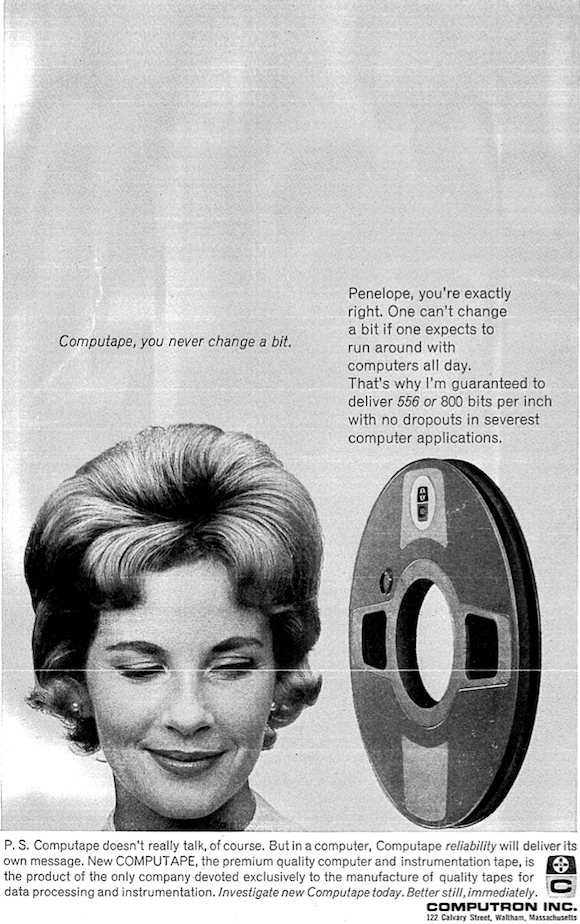 In 1966, Celanese Plastics Company told us to worry about Jim, its quality control expect because he may become a narcissist. Why, you ask? Apparently Celanese makes such smooth film for the manufacturing of tape memory that Jim can stand and look at it all day without spotting any flaws. Therefore, all he’ll see all day long is his own reflection . Bummer. 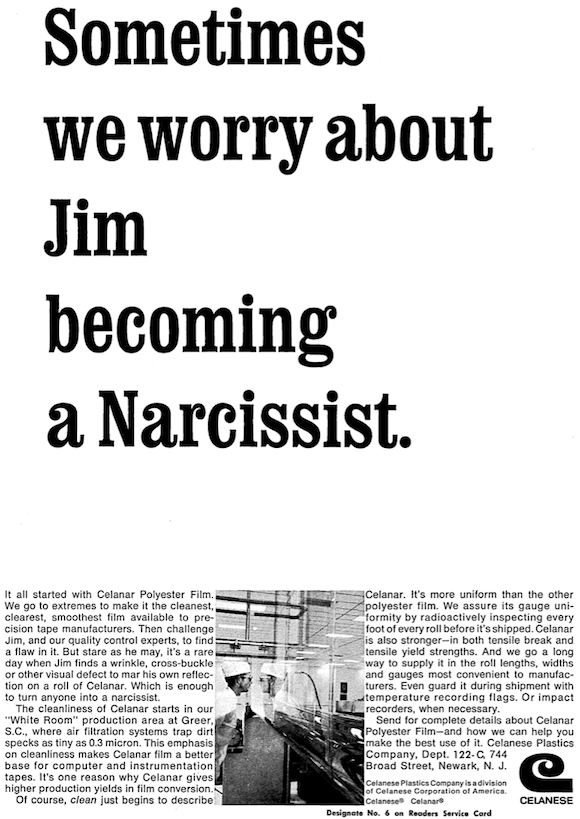 In what seems like a somewhat strange endorsement, Mr. John Fitzgerald, Data Processing Manager for United Artists Corporation says it uses Computer Audiotape “exclusively.” We’re not sure what to make of this since he also says the world of movies is “mad, mad, mad, mad.” 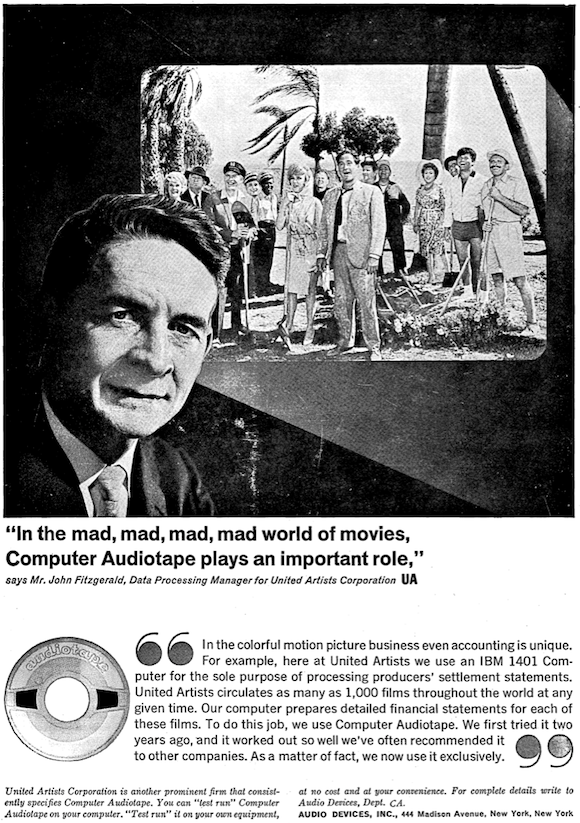 In 1967 Hewlett Packard wanted to sell you the “multi-lingual” 2115A (catchy name), a $16,500 computer able to speak Algol, Basic, and Fortran. Whether it could handle JavaScript, Python, or other more contemporary languages, the ad doesn’t say.

Once upon a time

In what must be one of the weirdest ads we’ve ever seen, the United States Motors Corporation is trying to promote… what exactly? Apparently, once upon a time it made all kinds of things, including “electric plants on wheels” and now it’s making “highly sensitive ‘no-break’ micro power electrical plants.” 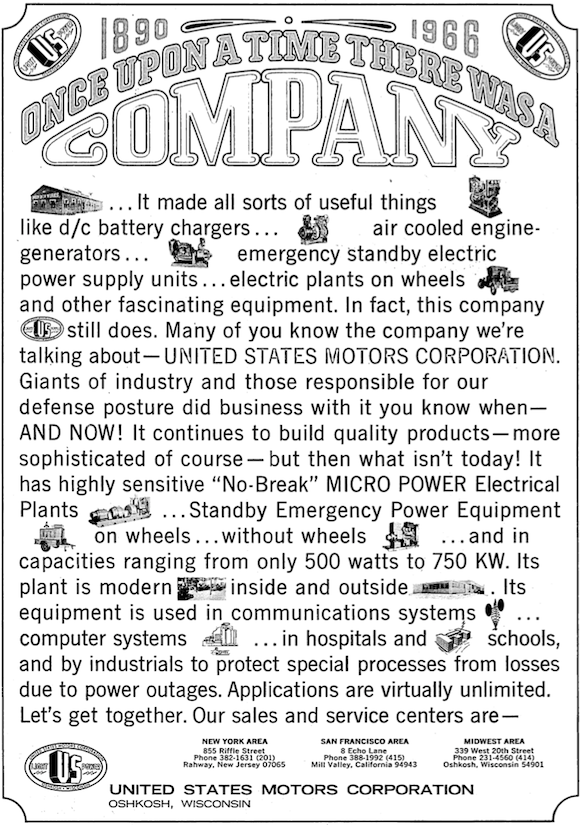 Yes, I want a computer in my submarine

The Computer Control Company seemed to be on a roll in 1964, offering a range of computers. You could get the “van mounted DDP-24” for $87,000 or, for your very own submarine, the DDP-24P. For the 24P model, you would probably pay significantly more, however, as it says “Pricing and proposals on RFQ.” 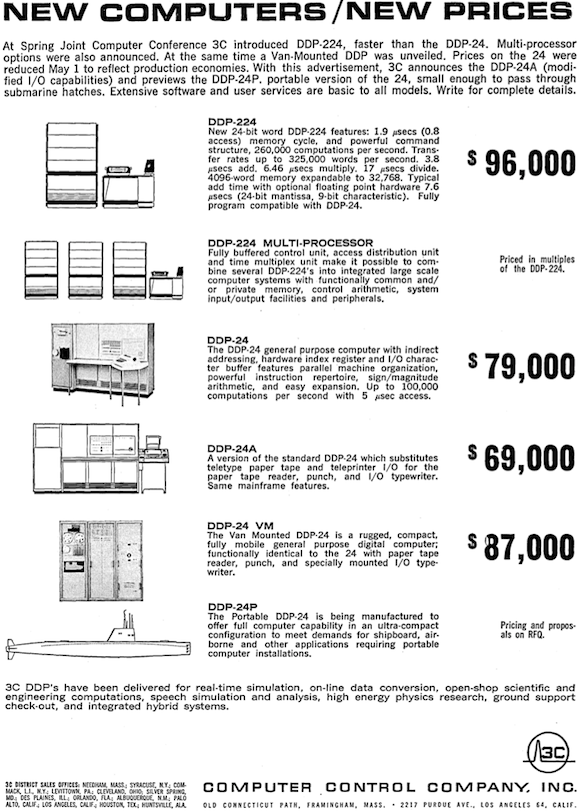 It seems like IBM hasn’t changed much, at least not in terms of advertising. Couldn’t you just see this ad in any magazine today, perhaps with some different text? 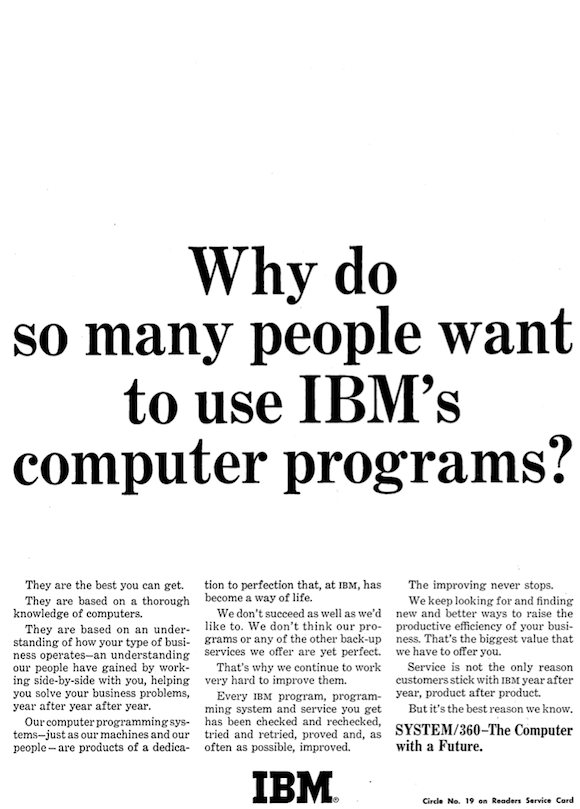 What about 50 years from now?

That’s our latest deep dive into the whacky world of vintage computing. At least it’s whacky seen through contemporary eyes, back then this was cutting edge. What do you think people in the future, say 50 years from now, will say about the latest tech in 2013? If we even have blogs then, someone might publish an article with examples from today and readers will chuckle at it just like you are right now.